National Ballet of Canada and The Royal Ballet
The Dreamers Ever Leave You
★★★✰✰
London, Printworks
12 October 2017
Gallery of pictures by Foteini Christofilopoulou
national.ballet.ca
www.roh.org.uk
printworkslondon.co.uk

The vast industrial site of the Printworks in East London is the latest challenging space for a dance performance – unusually, one by classical ballet dancers. The 15-acre site, formerly housing the printing operations of the Evening Standard and Metro newspapers, opened earlier this year as a Docklands super-club for music concerts, DJs, parties and cinema screenings.

To celebrate the 150th anniversary of the Canadian Confederation, the National Ballet of Canada and the Royal Ballet combined dancers in performances of Robert Binet’s The Dreamers Ever Leave You, originally created for the Art Gallery of Ontario. In Toronto, the performance took place in conjunction with an exhibition of paintings by the notable Canadian artist Lawren Harris (1885-1970).  In the Printworks in London, his images were not on show, so Binet’s references to starkly dramatic Arctic landscapes were lost on those unfamiliar with Harris’s paintings.

Instead of a cool white gallery space, the dancing was isolated within a cavernous hall, overhung with metal grilles and lighting rigs. In the centre, 13 dancers performed on three parallel strips of lino flooring like runways, moving between them and the spectators standing around them. The choreographic structure of small groups, duets and solos lasted for 45 minutes, but was performed three times without a break. Each dancer had time to rest (usually standing against a pillar) and spectators were free to stay or leave at any point.

Wandering around to the technical area, I could see over the bearded pianist’s shoulder his list of themes and timings. Canadian composer Lubomyr Melnyk has developed a ‘continuous piano’ method of improvisation, providing alternating moods and pulsing rhythms to which the dancers respond within the set parameters of Binet’s choreography. Melnyk’s list of themes included ‘angry, ‘perky’, ‘clouds’, ‘love story’, ‘barcarolle’ and ’The Beyond’. His cascading energy on the (amplified) grand piano was mesmerising – Binet describes the effect as transcendental.

The choreography uses a wide range of movement, from the long lines, soaring lifts and pointe work of ballet to yoga-like poses, sculptural shape-making, and rolling and lying on the floor. Watching The Dreamers Ever Leave You twice through, I began to recognise phases of movement and combinations of dancers. The four Royal Ballet participants, Francesca Hayward with Alexander Campbell and Yasmine Naghdi with Ryoichi Hirano, mostly interacted with each other, apart from a few sections when they shared a runway with one of the nine Canadian dancers.

I noticed that perambulating spectators preferred to watch a pas de deux or trio, moving away from a soloist because of the tantalising attraction of sweeping limbs or high-flying leaps, visible above watching heads, on a further away strip of dance floor. The drawback of site-specific dance is that you always suspect you’ve chosen the wrong place to stand or sit. The advantage is being able to see dancers close up, admire their control and precision, and almost read their thoughts and feelings.

Binet’s aspiration is that audiences should see beautifully trained dancers in a spiritual light, embodying Lawren Harris’s quest for the divine in nature. When principal dancer Heather Ogden stood very still on tiptoe, reaching upwards with both arms, she resembled a famous Harris painting of a tapering tree trunk lit by heavenly beams of light. Dancers are the athletes of god, Albert Einstein is supposed to have said; Martha Graham entitled a dance work Acrobats of God.

If you’d rather see Binet’s cast as human beings, there are narrative elements in the choreography. Hirano and Naghdi appeared to have an emotional Romeo and Juliet pas de deux, yearning and agonising to a surging theme. They ended up lying on their backs on the floor, bodies at an angle to each other. Ogden joined them for a meditative solo, as if in mourning.

Hayward and Campbell were more playful, assisting each other in leaps and trying out back-to-back lifts. Men partnered men in choreography that featured shoulder movements – shrugging, clasping, circling their elbows, slapping their torsos. Arguments erupted, punctuated by foot stamps and confrontations like stags locking horns. There were constant changes of pace, from sharp accents to smooth spins, from speedy runs to sustained poses, deep lunges to backwards skittering bourrées. Binet seems endlessly inventive in his use of emotionally charged ballet-based movement.

However, without the context of Harris’s mystic landscapes, the outpouring of dancing had no specific meaning or logic. The dancers appeared paradoxically remote, making no acknowledgement of their audience and rarely meeting each other’s eyes. The structure of the piece as a whole was hard to discern, since it wasn’t possible to see how the three parallel strips of movement related to each other. Only Binet himself, perched above the action on a small balcony, had a god’s eye view. 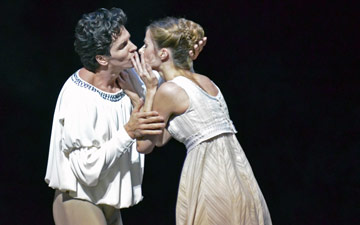 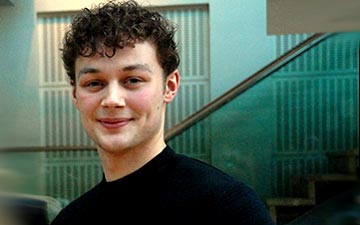