Karen Kain, Artistic Director of the National Ballet of Canada, on celebrating Canada’s 150th with a joint work that mixes NBoCanada and Royal Ballet dancers with a unique Docklands location on the 12/13 October… that and lots more

Event Details – NBoCanada and RB in The Dreamers Ever Leave You, Printworks London, 12/13 October, 3 performances each evening.

To mark the 150th anniversary of the Canadian Confederation, dancers from the National Ballet of Canada and the Royal Ballet will perform a site-specific work together in London’s Docklands. The audience will walk around the performers in the Printworks, a series of vast industrial spaces that once housed the printing operations of the Evening Standard and Metro newspapers. Appropriately enough, it’s in the Canada Water area of the former docklands.

The work the 12 dancers will be performing three times each evening, The Dreamers Ever Leave You, is by Robert Binet, choreographic associate of the National Ballet of Canada. He created it last year for the Art Gallery of Ontario, working out how to give each dancer time to rest during the three continuous 45-minute loops, lasting nearly three hours. He has organised the dancers into four groups, so the Royal Ballet contingent, Alexander Campbell, Francesca Hayward, Ryoichi Hirano and Yasmine Naghdi, will interact mainly with each other, since there has been little time for rehearsal with the NBC principals and soloists.

The full Canadian company has just been in Paris, performing John Neumeier’s Nijinsky at the Théâtre des Champs-Elysées before returning to Toronto. I spoke to Karen Kain, NBC’s artistic director, by telephone before the final Paris matinee. She was delighted with the audiences’ response and looking forward to watching her chosen dancers in London. I asked her about Rob Binet, who is a protégé of hers, and who spent 18 months with the Royal Ballet in 2011-2012 as a choreographic apprentice, being mentored by Wayne McGregor.

‘This is a young man I’ve watched since he was probably 12, all through his time at the National Ballet of Canada School, where he’d already started creating work for his fellow students. He’s very talented. He’s travelled all over and he now has a permanent place in our company as an associate. This year, I’m his mentor under a performance arts programme. I commission ballets from him, using our dancers for our stage and for special events, and he has his own projects. He comes to me with his ideas for dance in very different spaces, experimenting with what ballet can do.’

I comment that it must be a problem for artistic directors who bring on promising choreographic talent, only to find they become so much in demand that they are no longer available. Kain says she’s happy for Binet to work and develop elsewhere, since there are limited opportunities in the company’s large repertoire for new works, however much she would like to programme them.

‘I’m so happy I got Crystal Pite to create Emergence for us before the rest of the world wanted her. She’s come back to revive it for next season, so I’m lucky to have got her when I did. And I’ve been quick to get ballets from other much-in-demand choreographers like Alexei Ratmansky and Wayne McGregor and Christopher Wheeldon. We’re just about to do his Winter’s Tale again – the set and costumes are on their way from the Royal Ballet.’ (The National Ballet of Canada has shared the costs of Wheeldon’s Alice’s Adventures in Wonderland as well as of The Winter’s Tale.)

Although there’s no shortage of choreographers in Canada, francophone and anglophone, not that many use classical ballet as a basic technique. Kain says ‘I’m looking for choreographers who respect ballet training, even if they push it to extremes. We have youngsters coming out of the National Ballet School who want to dance Swan Lake, but they also want to try all of it. I reckon when they have the training to do the classical, and the appetite and the power to do the contemporary, then that’s the kind of dancer I’m looking for.’

NBC has its own distinctive productions of the ‘classics’, including James Kudelka’s Swan Lake and Nutcracker, and Rudolf Nureyev’s Sleeping Beauty. ‘I must say I push the organisation very hard to fit so much in’, Kain says. ‘We also do 20th century ballets by Balanchine and Robbins and Kenneth MacMillan, as well as the newer work. It’s a stretch for everyone to keep up with the range of what we do – especially the technical crew, who have to deal with the latest technology. How we ever find enough time – and money – for everything…but we manage, thanks to careful planning.’

Her biggest regret is that it isn’t possible for the company to film or relay its productions into cinemas, or to create DVDs. ‘The rules governing all forms of recording in North America are so astronomically expensive that we just can’t afford it. We can only live-stream in small amounts, like on World Ballet Day just recently. So if you want to see us perform, you have to come in person.’ 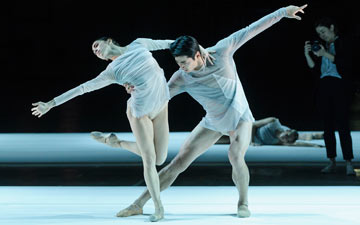