All credit to Viviana Durante for contributing to the 25th anniversary of Kenneth MacMillan’s death with recreations of his early work. Other ballet companies, with the notable exception of Scottish Ballet with its revival of Le Baiser de la Fée, have performed his later, more familiar ballets.

By retrieving ‘lost’ works from sketchy records and old videos, notators (Mayumi Hotta for Durante’s company, Diana Curry for Scottish Ballet) have preserved them for present and future dance lovers. We see them with different eyes, of course, from his contemporary audiences: we know how the promising young choreographer developed those early ideas. Durante didn’t set out to do a scholarly reconstruction of two of his 1950s ballets with the original designs. Instead, she wanted to give a sense of what it must have been like to perform and watch Laiderette and House of Birds, with a brief glimpse of Danses Concertantes, in which she danced the lead in the Royal Ballet’s 1990s revival.

The Barbican Pit, as dark and cramped as its name suggests, is not a suitable venue for ballet – even though MacMillan’s earliest works were given in far from ideal conditions: choreographic workshops in post-war Sadler’s Wells, unlovely theatres on tour with Ballet Rambert (with Laiderette, often mistaken at the time for the recent innovation of launderettes). Sightlines in The Pit are so bad that Steps Back in Time is better viewed on the livestream feed on the Barbican or Royal Opera House websites.

House of Birds, which opens the programme, was commissioned in 1955 by Ninette de Valois for the Sadler’s Wells Theatre Ballet (his second professional commission after Danses Concertantes). The story is based on a Brothers Grimm fairy tale, Jorinda and Joringel, in which a wicked Bird Woman entraps passers-by and turns them into birds. A pair of lovers wander into her domain. The boy is frozen by a spell while the girl is painfully transformed into a creature who can no longer relate to him. The extract Durante has mounted ends with the girl prostrate, as though dead.  In the rest of the ballet, true love  triumphs over evil. The boy overcomes the spell and releases the birds from their cages. They peck the Bird Woman to death, turn back into human beings, and everybody lives happily ever after.

Lauren Cuthbertson as the girl danced the role created for Maryon Lane, with Thiago Soares as her lover, originally David Poole. In 1955, Peter Wright and Donald MacLeary were among the ‘enchanted boys’, roles taken in the Barbican by members of Scottish Ballet and Ballet Black. Sayaka Ichikawa (Ballet Black) was the Bird Woman, with red ‘wings’ and a hooked beak. The costumes were imaginatively created by members of the ROH wardrobe department.  Nicholas Georgiadis’s vivid designs, much commented upon in contemporary reviews of the ballet, involved wings worked by the dancers’ elbows and birdcages over the girls’ heads.

The point of the reconstruction is to show the two contrasting pas de deux for the lovers, before and after the girl’s metamorphosis during her solo. MacMillan was experimenting with different kinds of lifts: very like Ashton in the ecstatic first one, with low-held support for the girl as she steps through the air, head flung back; then high-flying ones over the man’s back as she avoids confronting him in her avian transformation. Cuthbertson gives her feisty female personality, horrified during her solo at finding her limbs no longer seem to belong to her, until she struggles against her will in her lover’s arms.

There are already glimpses of choreographic devices MacMillan would use in later ballets. The lovers lie down together at the end of their first duet – radical at the time, re-appearing some 20 years later in the Manon pas de deux. The man is caught and held by the crossed arms of the male birds, as Rudolph is by the Hungarians in Mayerling. The mass killing of the Bird Woman recurs in even nastier form in The Judas Tree.

For the ballet’s score, John Lanchbery had arranged and orchestrated piano pieces by the Catalan composer Federico Mompou, finding an eerie melody for the girl’s solo. (Jonathan Higgins played the piano version.) House of Birds was often performed in the 1960s in production revised by MacMillan for the company then called The Royal Ballet Touring Section, directed by John Field. It had some remarkable casts, including Doreen Wells and Brenda Last as the girl and Christopher Gable and David Wall as the boy.

Next in Durante’s programme came a pas de deux from Danses Concertantes, danced by Akane Takada (Royal Ballet) and José Alves (Ballet Black) or Benjamin Ella (Royal Ballet). The ballet was MacMillan’s first commission for the Sadler’s Wells Theatre Ballet, given its premiere four months before House of Birds. It, too, was often revived by SWTB, and later by the Royal Ballet. Georgiadis designed it – his first collaboration with MacMillan – and redesigned it in 1979. Durante’s dancers wore the ‘original’ costumes from the Royal Ballet’s 1991 revival. Since the company still has the sets and costumes, another revival is due.

Stravinsky’s Danses Concertantes music has echoes of his Scènes de Ballet, and MacMillan echoes some of Ashton’s choreography for that ballet. (He’d danced in Scènes de Ballet before giving up performing after Danses Concertantes.) The original leads were Maryon Lane, Donald Britton and David Poole. Takada and Alves weren’t acerbic enough in the pas de deux, with its quirky pointwork, pointed fingers and bent elbows – very Balanchine.

In the final work, a reconstruction of the Laiderette in its entirety, Roland Petit’s influence is evident. Made for the Sadler’s Wells Choreographic Group in January 1954, it was done to a recording of Frank Martin’s Petite Symphonie Concertante, which scuppered the ballet’s chances of being taken into the SWTB repertoire. The music includes a harpsichord, which was deemed impractical for the company’s orchestra to transport on tour. When de Valois vetoed Laiderette, Marie Rambert seized it for her company, which was allowed by the Musicians’ Union to perform some ballets on tour to recorded music.  The reconstruction for Durante’s company was made from a 1966 film of Ballet Rambert’s production, with Maggie Lorraine in the role of Laiderette and John Chesworth as the Host. (The original leads were Maryon Lane and David Pooole.)

The action takes place outside a mansion where a ball is under way. A group of tattered strolling players arrives, very similar to Petit’s tired circus troupe in Les Forains, even including a girl child carried by her father. A sinister Mask Seller (Ricardo Cervera), much like the Rat Catcher in Manon, trundles a gramophone with a horn. He hands out masks to the ball guests (members of Ballet Black and Scottish Ballet) and leaves one for the clown family. They put the mask on their daughter and leave her on the steps of the mansion.

The Host (Thiago Soares) finds her and dances alongside her, echoing her swivelling steps as though seeking to communicate with her. Francesca Hayward was the girl for three performances, with Yasmine Naghdi replacing her for the livestream on April 19.  Both were appealing as Laiderette, ‘the little ugly one’, who knows that her looks repel people. She moves at first with the gaucheness of a child and flees at the sight of the guests, whose dances appear threatening. The Host tries to comfort her, sitting her on his knees until she cringes away from him.

She begins to trust him, after he has picked her up like a child, then kissed the back of her hand. Their duet starts with her circled round his waist, one leg extended – all rather creepily erotic. Watched by the clowns, she falls back in his arms, paddling with her legs until she ends up kneeling on his chest. The Mask Seller reappears, seemingly playing a record on his wind-up gramophone – a tingling combination of harpsichord notes and harp strings.  It sends the girl into a kind of frenzy, contorting her arabesque line and twisting her elbows behind her. She’s revealing her insecurity and the loathing she’s had to endure because of her ugliness.

Torn between longing and fear, she clings to the Host for support. Emboldened, she joins the guests’ dances, hoping for acceptance. But when the masks come off, she is exposed as bald and apparently hideous. Mocked, she is reclaimed by her clown family. They confront her with a mirror to remind her who she is and where she belongs. In an abrupt ending, the Host flings her wig and mask at her as she appeals in vain for his compassion.

Laiderette could well be performed in the remodelled Linbury Studio Theatre when it reopens. Although it’s of it’s time – all those clowns – it would be worth remounting with a proper set and a bigger corps of guests. I’d be curious to see a somewhat similar early MacMillan ballet, Winter’s Eve, made for American Ballet Theatre in 1957. It featured Nora Kaye as a vulnerable girl at a ball trying to connect with her lover. It turned out that she was blind. MacMillan was expressing his own secret fears of inadequacy and rejection, while critics were hailing him as a choreographer of possibly major dimensions. Thanks to efforts of Scottish Ballet and Viviana Durante’s company, we have been able to step back in time to watch some of his early work with the benefit of hindsight. 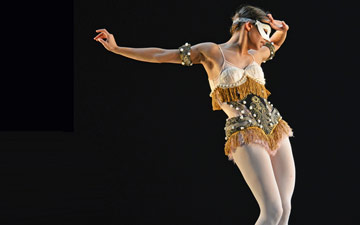 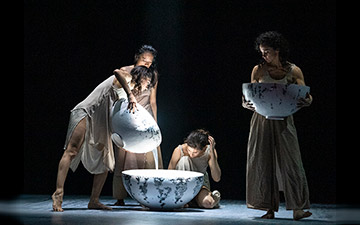 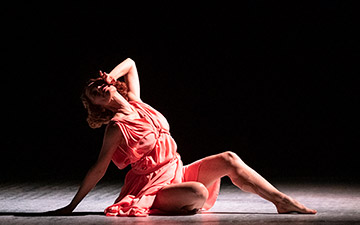