It’s always heartening to see a dancer take the initiative of forming his or her own ensemble on the side. Dance careers are so short, why not make the most of them? The quality of the choreography is not necessarily the main point, though good choreography is always a plus. What matters most – and this comes through to the audience as well – is the spirit of collaboration and discovery among friends, as well as, of course, the pleasure of seeing extremely good dancers move in a more intimate, informal setting.

Lauren Post, a member of American Ballet Theatre’s corps de ballet since 2008, has taken advantage of the lull before the start of the fall dance season to put together her first choreographic evening, Co.Lab Dance. Onstage were seven of her colleagues, plus one dancer from New York City Ballet, Russell Janzen. Three of the works were new; two were by ABT dancers (Zhongjing Fang and Duncan Lyle), one by a member of the Martha Graham Dance Company, Xin Ying. In an affable post-curtain speech, Post explained that before embarking on this project, she had never met Ying, but had been “stalking her on Instagram.”  Justin Peck gave permission for his 2013 pas de deux The Bright Motion to be performed by Janzen and (ABT principal) Isabella Boylston. Piano accompaniment was provided by Michael Scales, the pianist in residence at New York Theatre Ballet and a frequent class pianist at ABT. An admirable feeling of teamwork and mutual respect – so desperately needed in the New York ballet scene at the moment – reigned.

The setting was the large and beautiful penthouse studio of the Westbeth complex in the West Village, current home of the Martha Graham Dance Company, former home of the Merce Cunningham studio. Lots of history, as well as stunning views of the Empire State and Chrysler building in the distance. A good choice.

Atmospherics and good feelings aside, the evening was well-put-together, not-overlong, and agreeable in many ways, particularly in the dedication and focus of the performers and the use of live music. Yes, it was clear that things had been put together rather quickly, and that the dancers were just getting back into the swing of things after the summer hiatus. The pieces themselves varied significantly in their esthetics and approach. Bearing in mind that most of the choreographers are just starting out, I would argue that they should be looked at more as choreographic etudes – part of the job of making oneself into a choreographer – than as finished works.

Zhongjing Fang’s Seen by Two, a pas de deux for Lauren Post and José Sebastian, was one of those longing-filled duets that abound in the ballet repertoire. I think of them as depictions of an “unspecified romantic situation” (URS for short). To César Franck, the two dancers circled each other with far-eyed expressions; she dove into his arms, he cradled her, she covered her face with her hands. A bit of a cliché, but elegantly executed. Xin Ying’s Almost Ritual, for four women, seemed to be about feminine rituals of self-presentation: smoothing of hair, peering into mirrors (the studio mirror was exposed), fixing of clothes. Pina Bausch came to mind, albeit a kinder, gentler Bausch. This was the least musically-connected of the dances, which gave it a stop-and-start quality.

Janzen and Boylston performed Peck’s Bright Motion, originally made for Janzen and Sara Mearns. The selection had the virtue of bringing them together for the first time and a pleasure to see. Boylston has the rare quality of coming across as fully herself when she dances, especially in such close quarters. You can see emotions and thoughts as they cross her mind. After a slight partnering bobble, instead of tightening up as often happens, she looked up at Janzen with an expression of friendly forgiveness. It’s all right, she seemed to be saying, and both relaxed into the movement.

Peck’s pas de deux aren’t his strongest suit – the dynamics are almost fraternal, and lack tension. I’m always left wondering, who are these people? But even here, the excitement of his style comes through. He courts risk; often, it is the woman who initiates a bold move, which places the man in the position of having to react quickly, with impetus, a second before disaster strikes. The dancers’ reflexes are put to the test. There is excitement, too, in the strong, vigorous, streamlined use of the arms, the changes of direction, the bursts of swift movement. Like most of his duets, The Bright Motion ends inconclusively; the two dancers walk off in opposite directions, looking back at the last minute. In his desire to avoid romantic cliché, Peck seems stuck in a zone of ambivalence.

The musical discovery of the evening was Charles-Valentin Alkan’s Esquisses, op. 63, used by Duncan Lyle for his Sketches. These short and challenging piano works – kudos to Michale Scales – each with its own dynamic and mood, are ideal for a suite of dance miniatures. Lyle responded in kind, creating an intricate, and highly technical piece for seven dancers. The influence of Frederick Ashton was clear in the careful and imaginative use of the arms and the fast and neat footwork (if not always as neatly executed as it might have been!). Perhaps the most pleasing aspect was Lyle’s ability to create interesting geometries, arranging the dancers in different combinations that suggested both the challenge of math – how many ways can you distribute 7 dancers? – and the pursuit of harmony. In the way it organizes space, creating vistas and alleyways, classical ballet is reminiscent of garden architecture.

Sketches became more interesting as it went along; late in the piece, folk dance motifs and a hint of narrative emerged. The odd number took on a deeper meaning, as a dancer (Isadora Loyola) circulated amongst the evenly-numbered groupings. As the final note rang out, the group looked up, in unison, at something in the distance. What was there? You wanted to know more.

That is also true of the entire evening. What will Co.Lab become? I look forward to finding out. Meanwhile, it’s simply encouraging to see these dancers and emerging choreographers create something of their own. 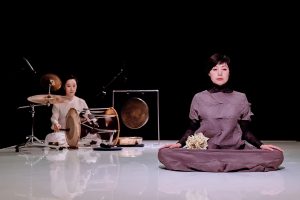