Tesseract is a curious, sometimes disorienting mix of film, live dance, and projections of filmed live dance. It was created by dancers Rashaun Mitchell and Silas Riener and the video artist Charles Atlas, all formerly performers or collaborators with Merce Cunningham Dance Company. The imagery is futuristic, influenced by science fiction, suggesting space travel and strange worlds. This European premiere of the work forms part of the Barbican’s Life Rewired project, which looks at what it is to be human in a time of massive technological change. The strange, perplexing images can rather dominate the dancing itself but it’s certainly an unusual and stimulating experience, if rather a cool and detached one.

The first part of the work is a film, viewed through 3D glasses. If that sounds a bit off-putting, it seems that 3D glasses have vastly improved since I last encountered them, and these were very effective. The dancers’ limbs appeared at times to extend out over the stalls: there was an instinct to duck. We began with dancers in a performance space hung with black and white banners through which the camera viewed them quite conventionally. Here we got a good look at the dance vocabulary of the six performers, which, unsurprisingly, had a strong element of Cunningham in its cool, clear abstractions, though there was a more nervous, hectic energy.

The sense of unease increased as the camera cut more rapidly from scene to scene, choosing ever more confusing viewpoints. There was a brief section where all the performers were wearing green bobbed wigs (I had a brief flash of memory of Gerry Anderson’s UFO tv series from the 70s) but here the film had been flipped through 180 degrees so that we saw their floor as a ceiling. Then we came to what might have been a settlement on the surface of Mars with the dancers performing solos garbed in bright orange.

Other excursions included a slow dreamy duet with the performers (astronauts or aliens?) in glittering costumes moving through haze, pursued from all angles by the roving camera. There was another more puzzling duet in a forest of plastic ropes which might have been an Eden, where two cord-entwined creatures interacted, a mix of human and bird of paradise. In another section, we might be on the inside of a kaleidoscope, and time might be running backwards but it’s over too fast to be sure. It’s all very cleverly put together, well matched to a score by Fennesz. The images are striking, and it’s impressive in its way but somewhat opaque and not emotionally involving.

In the second part, the audience gets to discard its glasses and watch live dance on stage. How tiny and vulnerable the six dancers initially look after seeing the giant images on the screen. The opening moments with the six dancers clad in translucent white seems a deliberate counterpart to the black and white initial section of the film, where we get the chance to see the dancers interacting as a group. The simple movements of the dance look calm and lucid, but this mood doesn’t persist for long. A cameraman clad in cerise pink (he’s not going to fade into the background) joins them on stage and projections of their movement appear on the scrim that they are dancing behind.

Merce Cunningham’s Biped (made in 1999) with its digital projections accompanying his dancers seems an obvious source of inspiration, but here the filming is more intrusive and the manipulation of the figures has been pushed much further, perhaps reflecting the technology available. Images multiply, are overlaid on one another and are flipped at odd angles. Simultaneously we see a dancer live on stage and multiple huge versions of him on screen, viewed from above as he whirls. There is always some twist or amplification of the viewpoint in the projected images, as the movement is scrutinised from all angles. Multiple cameras on and off stage are used. Towards the end one woman appears alone in front of the scrim, just her with no accompanying images. It is strangely transgressive in feel, as if a window had been smashed and cold air suddenly let in.

The choreographers, Rashaun Mitchell and Silas Riener, appear in both sections of the piece, but most of the other dancers in the live section are not quite the same as the ones in the original film. This adds to a certain sense of disquiet, as if our memories have become unreliable and nothing in this twisting and shattering universe is certain. Perhaps the dancers are striving for connection between each other, but the images continue to duplicate, fracture and splinter.

You could say that the filmed images dominate the dance to its detriment, but that in itself may be a comment on where our society is headed. The camera is in charge now. When there are both dancers on stage and their giant on screen versions moving as well, the eye is drawn to the projections. Maybe this is a warning about the siren power of technology. Its images become more attractive than reality. 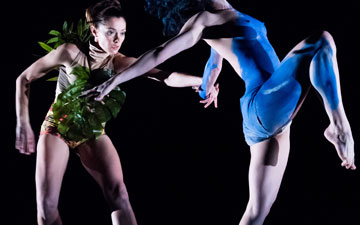