As someone who cries easily, it’s a wonder that Manon remains a favorite ballet of mine. However devastating, there are few male roles in ballet which exhibit the inner psyche of unconditional love and male chivalry with more eloquence.

Misty Copeland and Cory Stearns were passionate and persuasive in their respective roles as Manon and Des Grieux. While Manon is traditionally an impetuous, fickle lover, Stearns delivered an earnest, daring recklessness in response to Des Grieux’s earnest, steady devotion – they were not at odds with one another.

Des Grieux’s choreography reflects the artist it was originally created for, Sir Anthony Dowell. Clean finishes to difficult, atypical steps (a pirouette in plie ending in a kneel before Manon’s feet), require polished poise and long lean lines, all of which Stearns has in spades. Your heart aches when he arches back in a near semicircle, as he heads towards his lover. Des Grieux doesn’t fling his body around, the dancing is controlled, but the emotion is overflowing.

Kenneth MacMillan had a knack for this, and every step of Des Grieux’s solos have a purpose which enriches the next, and the next, so that by the penultimate step one has long been sold on the authenticity. While there is some mime, MacMillan’s steps communicate the emotion and plot for you – at times very little is left to the imagination. In his pleadings with Manon, Des Grieux’s limbs often stretche outwards, towards her, his entire body an offering.

But Stearns’ thespian instincts bring a lot to the table. At his first glimpse of Manon shackled in diamonds as the high priestess of courtesans, he looks so nauseous, so hurt, it looks as if he might vomit onstage. Stearns’ intelligent characterization of Des Grieux is aided by his wide-eyed, youthful visage which reinforces an innocence crucial to Manon’s storyline: Des Grieux is not an experienced man of the world but a naive, loyal romantic who pays the highest price for his love. I hadn’t thought about Des Grieux in this way in some time, and Stearns’ telling is as powerful a portrayal as one could ask for, and one to meditate on for years to come.

Copeland is an excellent Manon, alternately swooning for Des Grieux before flipping to a conniving coquette – so much so that one wonders what Des Grieux sees in her. She flickers like a flame among her gentleman suitors before melting once again in Des Grieux’s arms – and we believe her sincerity in both situations utterly. Her technique and dramatic prowess are a match in this role which features so much challenging partnering. Manon is a superb vehicle for this ballerina whose commanding presence rarely falters.

The audience gasped throughout, not just for athleticism but for the ballet’s dramatic swagger. Like a soap opera, Manon rarely leaves dry eyes, and it’s a reminder of how few story ballets today have any kind of ‘wow’ factor, choreographically or emotionally. Mime is minimized to what is necessary, but not so much as to be confusing. MacMillan’s choreography creates characters that feel fully fleshed out and deeply convincing. Maybe some of this stems from the fact that he was attentive to both sexes, allowing the male danseur to shine as much (and sometimes more) than the ballerina. Even the first pas de deux, for all of its sumptuous romanticism, has a game-like flirtation between them that reminds us of their naiveté, of the sparks of first love and foreshadows the risks their love is about to create. His capacity to communicate complex psychological conundrums remains a gift that is rare to find elsewhere on the ballet stage.

As Lescaut, Calvin Royal III held his own but lacked flare with a cape. Wobbly in a few sections but dramatically astute, his technique needs sharpening, but he danced the lengthy, difficult, drunk pas de deux exceptionally well. Alexandre Hammoudi was a strict and terrifying jailer, and soloist Arron Scott’s ripping technique and buoyant jumps made him shine like a diamond in the rough in his role as beggar chief. Nicholas Georgiadis’ sets and costumes hold up as a luscious, heavily ruffled representation of the excesses of pre-revolutionary France. 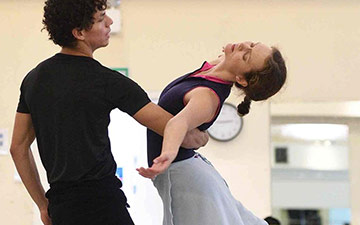