It’s hard to exaggerate the range of the choreographer Alexei Ratmansky. Last spring, at American Ballet Theatre, he created The Seasons, a ballet full of steps and images gleaned from his work staging 19th century ballets by Marius Petipa. In the fall, in Moscow, he created a version of Giselle brimming with revelatory details that washed away layer upon layer of cliché and old habits. In just under two months, he will unveil a big evening-length story ballet based on a 1st century Ancient Greek romance novel. And then there’s Voices, which premiered just two nights ago (Jan. 29) at New York City Ballet. It’s playful and off-the-wall, an experiment with spoken texts and unconventional movement and phrasing. A radical departure for a choreographer for whom musical response has been a chief guide since he began making dances over a quarter century ago.

The score is a series of pieces for voice and piano (entitled, simply, Voices and Piano) by the avant-garde Austrian composer Peter Ablinger. The choice was suggested by his son, Vasily, a composition student. Ablinger’s series includes dozens of voices, from Mao to Mother Theresa, but for this ballet Ratmansky has chosen pieces featuring the voices of five women, two of them Americans. They are: Bonnie Barnett, a California radio dj; a Norwegian folk-singer and friend of Evard Grieg, Gjendine Slålien; the Iranian poet Forough Farrokhzad; the African-American jazz singer and civil rights activist Nina Simone; the Japanese actress Setsuko Hara, star of many Yasujirō Ozu films; and the minimalist painter Agnes Martin.

The piano score, played live by Stephen Gosling, imitates the pitches and speech patterns of the voices; the notes are like a chart of the voice, or, in some cases, a rhythmic accompaniment to it. What a task it must have been to memorize the exact timing of each recorded voice! At the rear of the stage, a vibrating line tracks the rise and fall of each spoken text. The phrases are irregular, full of starts and stops. As Ratmansky told me when he was making the ballet, “the sound and colors of the voice, the intensity of the passion or the quietness, these are the colors I used.”* In some cases, the women are talking about important ideas; the section devoted to Nina Simone mentions Martin Luther King and the protest songs that affected the arc of her career. Some, like Setsuko Hara, are unintelligible to a large sector of the audience. Often, the words are obstructed by the piano. But even then, they are expressive. Hara laughs and cries; Slålien speeks with the warbly voice of an old woman remembering her youth. Bonnie Barnett has a pleasingly low, casual manner that conveys pleasure and enthusiasm.

In response to these pieces, Ratmansky has created solos for five of the company’s most interesting and unalike women dancers: Sara Mearns, Megan Fairchild, Unity Phelan, Georgina Pazcoguin, and Lauren Lovette. Five men come and go between the sections, arriving with linked arms, like a team of lifeguards. The costumes, colored leotards and short unitards by Keso Dekker, are sporty, too. Ratmansky gives each man a chance to shine, in the intervals between the women’s solos. Roman Mejía does an extra fast manège of leaps into the wings; Ask la Cour executes a backward diagonal of brises volés, like the Bluebird in Sleeping Beauty, except in reverse. Once in a while they catch or carry one of the women. And in the end everyone dances together.

But the focus is squarely on the women. Each solo is a miniature, a snapshot of one dancer’s movement qualities and personality. They are well paired with their corresponding voices. Mearns, who in real life has a low voice like Barnett, as well as Barnett’s ability to exude great pleasure in what she does, starts the series. She appears in an opening in the curtain. Her solo is wild, full of skitters and skips and creeping steps and tilts to the side. At one point she kneels and does an extravagant, and strange, backbend. Then the men arrive and she breaks through their interlinked arms and they all stomp off together.

Fairchild is paired with the voice of the Norwegian folk-singer. This solo is playful and offkilter. She claps her hands like Columbine in Harlequinade, except that here she does it off the beat, and falls on the floor, and then gets up and swims backward through space. Dancing to the voice of Nina Simone, Georgina Pazcoguin is fierce and decisive, swiping at the air with her arms. Echoing the man who danced just before her (Joseph Gordon), she executes enormous saut de basques. Phelan, dancing to Farrokhzad, has the least interesting steps; her choreography is the most balletic, full of taps and bourrées. Lovette, in contrast, enters with a loopy run in which her legs look like loose spaghetti strands; her solo is imaginative and playful and weird.

There is freedom in the choreography’s relationship to the music. It’s hardly arbitrary, though – this isn’t Cunningham. As Ratmansky told me, “I listened to the phrases and how they went. Sometimes I followed and sometimes I didn’t.” What’s even looser is the connection to the words being said. In some cases he seems to have been moved solely by the timbre of the voice. But there is some of Simone’s urgency in the steps created for Pazcoguin. And certainly the final ensemble, to Agnes Martin, has the feel of a manifesto. “Painters can paint about painting, but my painting is about meaning,” says Martin, as the dancers form various groupings, or partner each other, or go off and do their own thing. Here classical poses shine through: a fish dive, an arabesque. A frieze of dancers. In the end, they all fold down onto the floor. The curtain hovers over them. (A device several choreographers have used before.)

I suspect that because of its fragmented form, Voices is the kind of work that requires multiple viewings. But on first impact, I found that the overall effect was perhaps less than the sum of its parts. Where is that meaning Agnes Martin was speaking of? I missed a closer relationship to the words, particularly in the case of Nina Simone, who has so much to say, on issues of burning importance to this day. I didn’t feel that the steps, interesting as they were, carried the same power. Farrokhzad’s text hovered like an unanswered question, not just because she spoke in Farsi, but because neither the voice nor the choreography revealed much. The intensity of the ballet waxed and waned

And yet, I never lost interest. There was always something new around the corner, a surprising shape, a witty step, an unlikely transition. It’s clear that Ratmansky felt liberated by the unusual structure and soundscape, and this sense of freedom inspired a new vocabulary, a looseness and exploratory feel that were, in themselves, engaging to watch. And how they danced it! With fierceness, courage, and utter commitment. That, too, is a pleasure to see.

Voices closed a program that began with Christopher Wheeldon’s Polyphonia, perhaps his greatest work to date. Again, the cast was very strong; I point out in particular the duo of Jovani Furlan and Roman Mejía, two male powerhouses with a sense of play, as well as Sara Mearns, who turned the central pas de deux into a moment of meditation and transcendence. For a moment, I thought, this must be what it was like to watch Isadora Duncan, completely in the moment and at one with the universe. Justin Peck’s short ballet Bright, which has never amounted to much, was a bit of pleasant filler before Jerome Robbins’ Opus 19/The Dreamer. Gonzalo García was poetic and pliant, like a Pierrot in the moonlight, haunted by spirits. It was an impressive evening all around.

* I’m in the process of writing a book about Ratmansky, so we have these sorts of conversations. 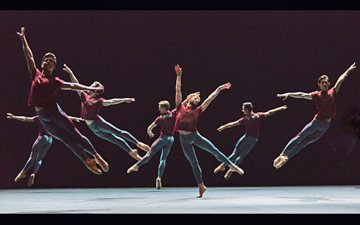