As tentative steps continue to get the dance world back on its feet, the Lawrence Batley Theatre in Huddersfield has asked three companies to embrace the possibilities of lockdown with a trio of filmed works.

Jordan James Bridge of Studio Wayne McGregor has created the 11-minute solo piece Locked Down, made on Izzac Carroll. Striking in vest top and pants, shaven-headed and brandishing nail polish and big rings, Carroll draws attention to the much-missed sensation of touch, running his hands over his body, curling and stretching in a search for comfort on a pared-down and sensuously red-lit stage. The camera work is close, jittery with jump cuts and blends. A switch in tempo and music leads us to follow him outside to the impressive courtyard of the theatre, a former Methodist chapel. Bridge’s choreography now lends him a slow, luxuriant grace, tiny circles of the wrist expanding into sweeping circles of legs and arms as a sense of escape permeates the piece.

Daniel De Andrade’s Locked In, for Northern Ballet, employs four dancers in a palette of black, white and grey, and camera trickery that sees them duplicated into 12 figures viewed from on high in the courtyard, and gently fading, as though they are ethereal presences. Connection – once taken for granted, now precious – is the theme running through these 24 minutes, as Sean Bates, Sara Chun, Mlindi Kulashe and Matthew Topliss respond to each other’s movements without touching, one often carrying on another’s move. The film switches to black and white as the quartet, stripped of free will, are pulled back by an invisible force through the theatre to the auditorium. Each dancer’s subsequent solo seems to represent a lamentation for what is lost: Bates’s slow classicism; Kulashe’s release of coiled energy; Chun’s pointework highlighting both strength and vulnerability. Music by Olafur Arnolds, Arvo Part, the polyphonic Corsican singing of A Filetta emphasises the mournful tone.

In contrast, Gary Clarke’s But Living has huge fun with the madness of modern times. Inspired by a 1903 film of Alice in Wonderland, he uses old-fashioned intertitles and an approximation of wobbly black-and-white film stock for his tale of a man (Gary Coward) alone in his shabby flat confronted with a demonic-looking White Rabbit (Gary Hartley Farrar) and tumbles down a metal-spiral-staircase-cum-rabbit-hole into a world of confusion and scrambling panic. Clarke’s robust, witty choreography links a series of vignettes: Coward slumped in an armchair in front of endless telly, hoarding pennies and tin cans, playing “track and chase” with the chuckling rabbit, ostentatiously clapping, and pressing himself to the window in desperation. Switching from soldier in the “war” on an unseen enemy, to a sad figure celebrating a solitary birthday, he’s reduced to hooking his fingers into the sides of his mouth to stretch out a smile. The Grimethorpe Colliery Band’s rendition of Dial M for Hitchcock adds to the propulsive force of a darkly humorous take on our current crisis. 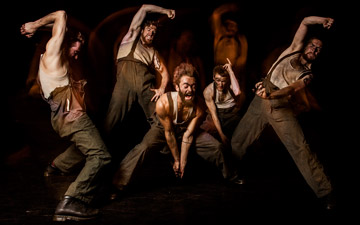 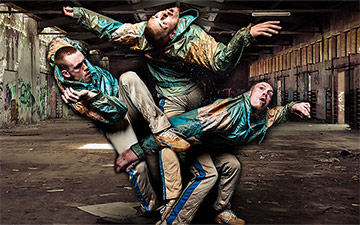 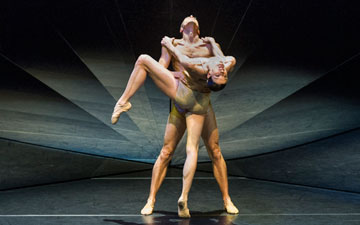