The past year has been full of virtual performances and galas. Over time, these have evolved from stop-gap, lets-make-the-best-of-it affairs, to polished, well-packaged films that will surely have a long after-life online. It’s not easy to capture the immediacy of dance, though a few people, like Ayodele Cassel, have managed the impossible. But another way of approaching the challenge is to create a satisfying film in which dance is treated as a work of art, like a painting or a sculpture that moves. New York City Ballet’s virtual spring gala (available through May 20 on the company’s YouTube page), is the most successful version of this approach I’ve seen.

The main feature of the half-hour broadcast is a beautifully-conceived dance-film directed by the Hollywood director Sofia Coppola, and sensitively filmed by Philippe Le Sourd. (The sponsor who made this collaboration possible is Chanel.) It combines vérité-style backstage footage with short excerpts from works in the company’s repertory: Dances at a Gathering, Duo Concertant, Liebeslieder Walzer, Divertimento No. 15, plus a new solo for Anthony Huxley by Justin Peck. These are filmed in different parts of the half-empty theater, through which the camera wanders, like a curious visitor, peering through doorways.

Most of the film is in elegant black and white, but the final segment, which shows the finale from Balanchine’s Divertimento, bursts with color, as if the windows had been opened, the lights turned on, bringing energy, color, and life back into the theater.

Intelligence and care are evident in every aspect of the production: the selection of excerpts, the fluidity with which they are strung together, the settings. The poetry of the cinematography should come as no great surprise; in all her films, which include Marie Antoinette and Lost in Translation, Coppola treats her subjects with a poet’s touch. She loves to linger on skin, to admire the drape of a dress, to suggest the atmosphere in a room.

Even so, I tend to associate Coppola’s films more with stillness than with movement. And we all know that dance is difficult to capture on film. If the camera is too inert, everything looks flat, but if it moves too much, it distracts from the choreography’s inner logic. Coppola and Le Sourd have found a happy medium, showing us things we don’t normally get to see, like a smile between partners, but also capturing the contrast between a tiny, fragile body onstage and the vastness of the theater. Sometimes, as in Divertimento, the camera moves along with the dancers, unobtrusively allowing us to see them as if we were onstage with them. We feel the energy of their movement, the quickness of their feet, the camaraderie among the dancers of the corps de ballet.

The beginning is especially beautiful: Gonzalo García, who is retiring soon, walks down a corridor and into a large, well-lit studio, to dance the opening solo from Jerome Robbins’ Dances at a Gathering, a ballet about returning to a beloved place. Accompanied by the pianist Susan Walters, he dances pensively, quietly, half to himself, half to the mirror. The camera leaves him there, watching through the doorway as he stands at the barre, catching his breath.

This leads into a short passage from the beginning of Balanchine’s Duo Concertant, accompanied by Arturo Delmoni (violin) and Susan Walters (piano), filmed in the wings. Russell Janzen and Ashley Bouder dance together, crisply, playfully. Again, the choice is apt: Duo is about the intimacy and joy of dancing together to music. The camera captures Janzen’s shy smile as he turns his head to look at his partner, and along with it, a moment in time, not to be repeated. When they finish, we hear them breathing. Coppola has captured not only the spaces, but also the sounds of the theater: creaky wood, pointe shoes on a sprung floor, the shuffling of tutus.

A pas de deux from the first half of Balanchine’s Liebeslieder Walzer, in which the women wear ballgowns and heeled shoes, is filmed on the grand promenade, watched over by Elie Nadelman’s giant, benevolent statues. The dancers are Maria Kowroski and Ask La Cour, also retiring soon. I confess that this section filled me with sadness. Not only is Liebeslieder, set to Brahms, and evocative of a lost world, one of the company’s most elegiac works, but seeing it filmed in this way magnified its effect even more. The long dress, the feeling of silent, contained emotion, the vastness of the space, the caressing presence of the camera – all of this produced chills.

Peck’s solo for Anthony Huxley (entitled simply, Solo), which follows, is a kind of meditation set to the over-used “Adagio” from Samuel Barber’s Op. 11 string quartet. We see Huxley from far away, with the auditorium’s lamps glowing all around, like jewels. Gradually, the camera draws close, as he moves around the stage with that beautiful, quiet precision for which he is known. Peck’s choreography is layered in long, run-on phrases; nothing looks too set or structured. Here and there he has dropped little suggestions of other ballets, like Balanchine’s Square Dance and Apollo.

And then comes the finale, from Divertimento No. 15, surely the most challenging, aerobic dancing of the night. First Emily Gerrity, then Unity Phelan, then Tiler Peck run on, dancing with the speed and lightness for which the company is known. Peck, in particular, astounds with her boundless energy. For one moment, Mozart’s sparkling music becomes pensive and inward, introducing a note of doubt; and then they’re off again, speeding toward a joyous finale.

After they finish dancing, the camera takes us behind the curtain. The dancers gather for a group photo. “See you soon,” one of them says. It’s a lovely touch, not too forced. One that makes this viewer all the more eager to watch them tear across the stage in the fall. 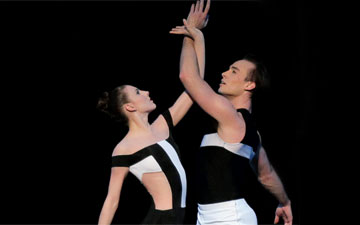