Sarasota Ballet’s digital Ashton triple bill was mounted by Iain Webb, the company’s artistic director, and his wife and co-director Margaret Barbieri. They both danced in Frederick Ashton’s ballets during his lifetime and have staged over 20 of his works for Sarasota Ballet. While the company’s audiences in Florida may be familiar with much of the Ashton repertoire (more so than many British ballet lovers), international subscribers to SB’s digital offerings have been able to catch up with some little-seen gems.

Valses nobles et sentimentales, to Ravel’s music of the same name, was brought back from obscurity by Sir Peter Wright in 1987 for the company that is now Birmingham Royal Ballet. Ashton had choreographed it in 1947 for the very young dancers of the post-war touring company, the Sadler’s Wells Theatre Ballet, as a way of testing their professional prowess. The revival was re-created, 40 years on, from dancers’ memories, with revisions by Ashton himself. The designs were copied from the originals of Sophie Fedorovitch: claret-coloured jackets and crimson tights for the men, white dresses and long gloves for the women; a set of transparent screens in shades of plum, with shadows of palm leaves projected behind them.

The action takes place in the anteroom to a ballroom, the ten dancers entering and leaving with different partners. After a formal ensemble of waltzing couples, a principal woman, Victoria Hulland, takes centre stage, courted by two suitors, Ricardo Rhodes and Daniel Pratt. They promenade her at arms’ length, circling her as she balances on pointe, one leg held high. She hesitates between them, choosing each in turn, though her preference will be for Rhodes. On her own, she repeats a slow version of the ‘Fred step’ that appears in most of his ballets. She gives way to watching girls, who hop on pointe, twist and curve their shoulders and flick their gloved wrists.

Three men get a chance to show off their elegant arabesques and multiple turns before seating themselves in a line to admire a trio of demure young debutantes. Hulland is carried in by her two admirers, her legs stretched across their shoulders – a startling sight in so decorous a gathering. As the moods of the music change, the dancing becomes hectic, the swooping moves from side to side reminiscent of Ashton’s bigger Ravel ballet, La Valse. Assignations appear surreptitious, one partner hidden behind a screen as another searches, mirroring the same movements without being able to touch each other.

Gradually, it becomes evident that the ballroom dances are recollections of youthful romances. Hulland puts her hand to her eyes, as if recalling her earlier pas de deux with Rhodes and wondering whether she really chose him. The music grows woozy and dissonant, and the choreography of the opening waltz is reprised as the ballet comes to an end. The principal woman, her two suitors and the debutantes are now ghostly figures glimpsed behind the screens, rising in repeated arcs, forever dancing in the woman’s memory – or Ashton’s. This later version of his ballet is surely more nostalgic than the one he created 40 years earlier for youngsters at the start of their careers.

The Walk to the Paradise Garden is a pas de deux made for a Royal Ballet gala in 1972 and given again ten years later (according to ROH online archives) by the same performers, Merle Park and David Wall, with Derek Rencher as the final apparition. Dame Merle was involved in its revival for an Ashton Masterclass in 2016, now on YouTube: https://www.youtube.com/watch?v=J26MkUZowSs

Now seemingly revered as a nearly lost Ashton gem, ‘a ballet in miniature’, it’s an extravagant pièce d’occasion, designed to rouse emotions and applause in a short space of time. The music is from a rarely performed opera by Frederick Delius, A Village Romeo and Juliet, in which a doomed pair of lovers choose to die together by drowning. The Paradise Garden was the name of the rural pub. Ashton’s choreography refers to Romeo and Juliet choreography, his own and Kenneth MacMillan’s, with the inevitable tragic ending.

Many of the lifts for the lovers are familiar, ranging from supported runs for Juliet on pointe to Fille mal gardée swings from side to side, Bolshoi style one-arm elevations and dramatic drops into Romeo’s arms. The most memorable lift is an upside-down one, in which the ballerina is suspended vertically high above her partner’s head, her arms extended in a cruciform shape. Her long skirt hangs over her partner’s head, blinding him as he revolves with her, her underwear unbecomingly exposed. The upside-down lift is my abiding memory of the 1982 gala.

Danielle Brown and Ricardo Graziano dance the pas deux with romantic grace but without the fervour of a performance for a responsive audience. Though they indicate with apprehensive glances that something ominous is about to happen, they can’t foresee the melodrama of the conclusion. Tall Richard House, bald headed and bare bodied beneath his voluminous cloak (apart from an eye-catching loincloth) is revealed, standing on a set of stairs. He enfolds the lovers in his white cloak, exposing each in turn as they huddle beneath his arms. They tumble headfirst down the steps, lying still with their legs neatly crossed over each other’s, poignantly reaching hands just touching in death. Without the context of a bravura gala, the piece feels preposterous.

Ashton’s Façade is a series of giggles, poking fun at social conventions, folk dances and music hall frolics. The music by William Walton was originally set to nonsensical poems by Edith Sitwell, who refused to have anything to with the ballet (apparently to her later regret). It was first staged in 1931 by the ambitious Camargo Society, using dancers from the early Ballet Club; former Ballet Russe ballerina Lydia Lopokova was a guest artiste. Façade later joined the repertoires of Ballet Rambert, the Vic-Wells Ballet and Sadler’s Wells (Royal) Ballet. Both Royal Ballet companies have performed it over the years, though not often in recent times. Sarasota Ballet first mounted it in 2008, with Gary Grant’s agreement as its rights holder.

The Sarasota dancers enjoy themselves, dancing with vigour and comic exaggeration. They play down some of the naughtiness, either because of the absence of an audience ‘s laughter or because the current climate is verging on the puritanical. The Popular Song pair of dead-pan men in blazers and boaters (Ricki Bertoni and Yuri Marques) are not as camp as they have been in the past. The gigolo (Ricardo Graziano) can no longer be referred to as The Dago, an offensive term. His nameless partner in the Tango-Pasodoble (Kate Honea) is no debutante but a socialite out of her usual milieu. (Lopokova originally wore a girlish party frock, cute little hat and a blank, doll-like expression. Later performers have made the role more sophisticated, if still naïve.) Honea channels a wealthy patron of the arts with an unexpectedly louche dance partner, while Graziano exudes a not-too-oily charm as he tries to take advantage of her.

Are the Scotch Rhapsody and the Alpine number for the milkmaid and her admirers cultural appropriations? Is the Polka dancer, dropping her skirt and dancing in her frilly knickers a flirt or a feminist? Katelyn May sassily polishes off the role’s gargouillades but not the double tours en l’air at the end of her variation. Ever since Alicia Markova first introduced the technical feats, Polka dancers have been challenged to meet them. (In the Royal Ballet’s 1994 revival, Jane Burn accomplished the double tours en l’air.) By the time of the joyously silly finale to Walton’s tarantella, none of these cavils matters in the slightest. As the ballet’s full title insists, Façade is an Entertainment. We thank Sarasota Ballet for reminding digital viewers what fun it can be. 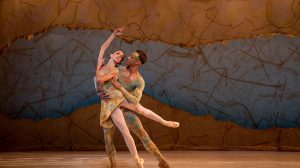 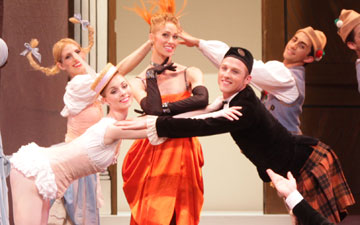