The discovery of a hitherto overlooked ballet by Ninette de Valois was made by Anna Meadmore, manager of the Royal Ballet School’s Special Collections, during her research for her doctoral thesis on de Valois’s early career. Meadmore came across a manuscript in the Collections by Ursula Moreton, with detailed rehearsal notes for The Arts of the Theatre, a short experimental work choreographed by de Valois in 1925. Moreton, who became de Valois’s valued assistant for nearly 50 years, was one of five young women who performed the piece at the Queen’s Theatre in London. The occasion was probably for one of the annual Sunshine Matinees established by Phillip J. S. Richardson, founder of the Dancing Times and what later became the Royal Academy of Dancing. The matinees, which lasted from 1919-1930, were in aid of Sunshine Homes for Blind Babies, now the Royal National Institute of Blind People.

Meadmore thought that reconstructing The Arts of the Theatre would cast light on de Valois’s formative ideas about classical and modern ballet, and their relationship to other theatre arts. By the end of 1925, De Valois, aged 27, had left Diaghilev’s Ballets Russes and was seven months away from founding her own Academy of Choreographic Art, later to become the Royal Ballet School and Company. Meadmore recruited students at the Upper School to take part in the reconstruction project as part of their final year BA degree dissertations. Five of them, in costume, performed The Arts of the Theatre twice during the School’s livestream on 12 May, repeating the 12-minute work after Meadmore had explained and analysed its choreographic motifs.

She advised viewers that it was not an ‘authentic’ remounting of de Valois’s creation but an informed interpretation of what it might have been like. Moreton’s rehearsal notes used familiar French ballet terms and provided details of groupings, travel paths and timings, but information was missing, including solos for de Valois and for Moreton herself. Meadmore supplied steps and poses from other early ballets by de Valois, with references to choreographers and dancers de Valois respected, such as Bronislava Nijinska, Leonide Massine, Anna Pavlova and Margaret Morris. All five original performers had studied with Diaghilev’s ballet master Enrico Cecchetti, so his influence would have been present, along with that of Dalcroze eurythmics exponents.

My first impression of The Arts of the Theatre on the Upper School studio stage was that it resembles a ‘modern’ ballet version of The Sleeping Beauty fairies’ variations. Five figures representing different arts – music, painting, dancing, comedy and tragedy – perform a solo, each with a gestural motif, before reuniting as an ensemble. The music is Maurice Ravel’s La Valse, transcribed for a single piano, played by Domenica Cardullo, accompanist at the RBS. De Valois was possibly the first choreographer to use La Valse after Diaghilev had rejected it in 1920 as unsuitable for ballet. (Some years later, Nijinska, Ashton and Balanchine had no such reservations.)

Although Ravel’s music is in waltz time, de Valois’s choreography and Meadnore’s contributions do not emphasise lilting balletic balançés or waltzing twirls. Instead, the choice of steps is intended to define the characteristics of each role – lyrical, dramatic, heroic, comical. The speedy footwork associated with many of de Valois’s (and Ashton’s) creations isn’t evident, though the co-ordination of upper and lower body tests the training of the student performers. The structure of the piece is tightly organised, following Moreton’s instructions. The way it fits the music must be thanks to Meadmore, since no form of notation was available to Moreton.

After the initial performance by the students, Meadmore brought them back to illustrate and discuss the various choreographic motifs. They then repeated the performance to give viewers another chance to appreciate it with greater insight. The colourful off-one-shoulder costumes were devised by Suzie Holland and Meadmore to resemble those by Kathleen Dillon, designer of de Valois’s early ballets. The first solo was given by the student dressed in blue, Grace Carroll, who took the role of Music, originally performed by Dorothy Coxon. Coxon, de Valois and Moreton had all been in the Ballets Russes and the Massine-Lopokova company. In Music’s variation, the dancer presses her wrists together and circles her arms as though emitting sound waves. Stepping on pointe, she makes frequent use of an attitude devant, torso inclined towards the raised leg – a signature de Valois position.

Ninette herself was Painting, danced by Viola Pantuso in green. She makes swooping brush strokes and scribbling gestures, lifting her elbows above her shoulders and descending to touch the floor. The third and principal role of Dancing, originally given to Molly Lake, was taken by Ava May Llewellyn in white. Lake had been a member of Pavlova’s company, so her variation as Dancing probably emulated Pavlova’s ‘flickering’ quality, with many light, low grands jetés and extravagantly flowing arms. This, the longest variation, establishes Dancing as the central Theatre Art; the dancer becomes the focus point in subsequent tableaux.

Next came Comedy in canary yellow, danced by Rimi Nakano in Margaret Craske’s role. Craske, one of the founding teachers in de Valois’s Academy, later became a venerated Cecchetti teacher in the United States. Comedy is a commedia dell’arte Harlequin figure; her fingers form a mask across her eyes, then lock thumbs to flutter like a butterfly. Her mocking stance is at an angle, hands clasped behind her back or raised in a shrug.

The last variation was for Tragedy, Moreton’s role, danced by Eleonora Ancona in red. Tragedy assumes a grandly heroic mode, repeatedly striving upwards only to be cast down. She wrings her hands, holds them together high above her head in arabesque, covers her face in grief. She is a prophesying Cassandra, warning of disasters to come as well as recalling those past.

In the final section, as Ravel’s waltz grows hectic and woozy, all five Arts return to make a V-shape, with Dancing running around and between them. Each reprises her signature moves before they combine in unison and form a striking Nijinska-like tableaux. They end as they began, kneeling together in a sideways-on grouping, pulsing their arms in wave motions before subsiding into stillness. The theatre arts will rise again, reassembling for the next creation.

The second online opportunity to watch the students’ performance was rewarding, thanks to Meadmore’s explanations and the dancers’ comments on their roles. We’re no longer accustomed to symbolic characters in ballet, apart from Balanchine’s Apollo and his three muses. De Valois’s choreographic style is also increasingly unfamiliar, now that her ballets (or excerpts from them) aren’t given in galas in her honour, as they used to be. The Arts of the Theatre makes for refreshing viewing – an insight into her youthful manifesto about dance’s importance as a theatrical art. Anna Meadmore’s recreation of the ‘lost’ work serves as a guide for students and dance-lovers in general in appreciating modern ballet experiments in Britain in the 1920s. In any event, the streamed performances were a considerable, and enjoyable, achievement by Meadmore and her Royal Ballet School collaborators. 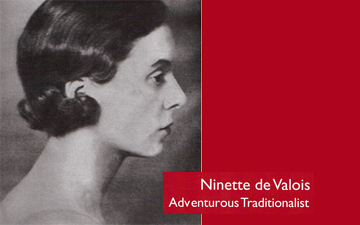