Paris Opera Ballet director, Brigitte Lefevre, opened her penultimate season with a trio of Balanchine classics. It was a varied and well-balanced bill, mixing two early but very different ballets, Serenade and Prodigal Son, with Agon, one of his ‘black and white’ masterpieces.

The programme started with Serenade, a perfect opening ballet, that always looks wonderful on the Garnier opera house’s huge raked stage. Karinska’s long blue tulle tutus, simpler than was her usual style, suit the romantic lyricism of Tchaikovsky’s music.  The lighting captures the eddying flows of dancers that Balanchine choreographs into constantly changing patterns. The atmosphere, the sense of mystery that develops in the second section and the preponderance of women dancers, all seem to parallel Les Sylphides. The company danced Serenade well but the very simplicity in its choreography, created as it was initially for students, ironically makes it hard to produce a perfect performance. One of the newest etoiles, Ludmila Pagliero, who is widely admired, danced in both performances I caught but Pujol impressed more in the first performance whilst Mathilde Froustey, still only a sujet, and not originally cast, danced with delicate musical phrasing in the second. A key role is the second male. Pierre-Arthur Raveau,  only 21 and being propelled by the company, took this role in both performances but does not yet have the presence to carry the relationship with the two competing women.

Whilst the opener was Balanchine’s first ballet created in America the third one was the final work he choreographed for Diaghilev. The Prodigal Son is a supreme example of the Diaghilevian aesthetic of the close marriage of a commissioned score, by Prokofiev, stunning designs by Rouault, and a dramatic scenario by Boris Kochno, all inspiring the choreography. The  explicit narrative and the decor are far from typical of Balanchine’s later work, as is the modernist strain in the choreography of the middle scene. It provides two significant roles, the Prodigal Son, which so many major male dancers have attempted, requiring acting ability, and the Siren, a femme fatale who needs a strong dramatic presence. The role of the Siren would seem tailor-made for Marie-Agnes Gillot with her commanding height and endless legs but she made less of it than I expected, although acting and dancing it well, as did Agnes Letestu who made more impact than is sometimes the case. Jeremie Belingard and Emmanuel Thibault both projected the emotional journey of the Prodigal Son movingly.

The middle ballet, Agon, to an occasionally strident score by Stravinsky, composed specifically for Balanchine, is starkly modern. When performed as well as this it seems more contemporary than the most extreme efforts of current dance-makers, even though it’s 55 years old. All the dancers were good, but Aurelie Dupont and Nicolas Le Riche were superb in the testing pas de deux. Like the greatest Balanchinean dancers they didn’t just dance the steps but explored the scope and meaning of each movement and the intricacies of their relationship.

The programme was a fitting tribute to Balanchine who is one of the choreographers the company regularly perform, having 30 of his ballets in their repertory. The rest of the season is varied, including a new ballet created by Gillot, paired with a Cunningham piece, next, followed by tributes to Nureyev and to Petit, programmes including Kylian, Neumeier and Bejart, some contemporary works and Lacotte’s reconstruction of La Sylphide. A varied season indeed. 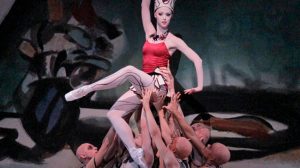