John Cranko’s Onegin has become the Swan Lake of the past quarter century. The 48-year-old ballet has now been performed by most of the major ballet companies in the world as well as by some lesser-known ones. Based on Alexander Pushkin’s verse nove, Eugene Onegin, the dramatic narrative provides some of the most emotionally complex characters in the ballet repertoire. They challenge the dancers to draw on all their artistic powers in bringing them to life. All five principal roles – Onegin, Lensky, Tatiana, Olga and Gremin – ideally need to be worked on collaboratively to ensure that each one’s interpretation fits in with all the others’ portrayals. On the other hand the music is a patchwork-quilt compilation of Tchaikovsky piano pieces (including parts of The Seasons) and portions of larger orchestral works – Francesca da Rimini, Romeo and Juliet and Symphonic Fantasy. Despite the fine orchestration by Kurt-Heinz Stolze and exceptional conducting by Charles Barker, the score still lacks the grand melodic and emotional sweep of his ballets – Swan Lake, Sleeping Beauty and Nutcracker. I wish that Cranko had used the music from the opera Eugene Onegin by the same composer to carry the ballet forward with an innate momentum. This season and last, the programming offered both Onegin and Yuri Possokhov’s Francesca da Rimini (yes, to the Tchaikovsky score) to make for some musical over-exposure. At least the orchestra will be playing well.

I first saw Onegin with Marcia Haydée and Richard Cragun when the Stuttgart Ballett made its New York debut in 1969. So when San Francisco Ballet premiered it in the 2011-12 season I was happy to meet an old acquaintance again. Last February I caught one cast and this time around I was able to see three casts which I will discuss presently. It proved quite interesting to see how radically different each cast was in each of the roles and how a dancer’s interpretation was capable of altering my perspective on the entire ballet.

Saturday evening’s Tatiana and Onegin are Vanessa Zahorian and Davit Karapetyan, a married couple when off stage. Zahorian plays the naive country girl of the first act quite well, but needs to find more passion when she pursues Onegin, especially in the mirror pas de deux when she dreams of being in his arms. If she doesn’t exhibit enough romantic ardor as part of her fantasies about the newcomer then there isn’t enough contrast to justify her feelings in the third act when she rejects his attentions. After the duel, however, Zahorian does show us a chilling change of heart as she finally sees Onegin for who he really is. She does extremely well in establishing her loving relationship with her husband, Prince Gremin, danced by the adoring and supportive Ruben Martín Cintas, in both the pas de deux at the ball and then again in the mime just before the final scene with Onegin. Her absolute resolve and steely restraint in the last pas de deux are, for me, far more powerful than any hysteria could ever be. She makes a decision and stands by it, despite having been tested by her own flickering memories of the past.

Karapetyan is a very dynamic actor as well as an excellent dancer. His characterisation of Onegin is one of a very self-absorbed man whose internal life sometimes overshadows his real one. At first he seems oblivious to the pain he is causing Lensky by flirting with his fiancée Olga, but once challenged to a duel, he reluctantly follows through only because Lensky refuses to listen to reason. His despair over killing his friend is wrenching. Years later he is till haunted by his past and again resorts to his own egocentric view by futilely pursuing Tatiana.

Dana Genshaft and Jaime Garcia Castillo as Olga and Lensky bring an astounding musicality to their first act pas de deux, one that actually erases the awkwardness of the choreography. Castillo goes on flawlessly to dance the solo before the duel with such heartbreaking emotion that I am moved to tears. Every arabesque, every turn is an eloquent word in a final farewell to life.

Sunday’s matinée has a last minute cast change and I am at first disappointed not to see Maria Kochetkova and Vitor Luiz in the lead roles. But the partnership between Yuan Yuan Tan and guest artist Cory Stearns of American Ballet Theatre brings a real surprise. Like Zahorian, Tan could be more swept away with Onegin in the first act. Her dancing is lovely – light, fluid and precise – and she seems to be inspired by her new partner, Stearns. She is also quite touching in the pas de deux with Gremin, danced solicitously by Damian Smith. The final pas de deux is very intense and emotional and she is completely distraught at the end, in fact, out of all proportion to any previous hints she may have given as to her feelings. The good news is that she has really made a personal break-through toward becoming a dramatic performer. Hopefully she will learn how to utilise that ability in appropriate ways. Stearns also starts out slowly and is quite bland in spite of his polished technique. Only when he is on his way to the duel does he finally show some substance. Although not as nuanced an actor as Karapetyan, he still creates a faceted Onegin. He also has marvelous partnering skills that show Tan off at her best. Castillo reprises his role as Lensky and is once more utterly moving.

The best cast is the last one on Wednesday evening, with Kochetkova and Luiz as Tatiana and Onegin. Kochetkova manages the best balance between naiveté, passion and maturity. She shows her final internal struggle with complete clarity. Throughout the entire ballet her dancing is never less than a seamless unfolding of her character where the steps dissolve in the telling of her story – always impeccable and musical.

Luiz is terrific all around, as he passes through being bored, irritated, remorseful and passionate. His technique melded with his emotional expression, he builds a strong rapport with his partner. Clara Blanco is a marvelous Olga, both sunny and teasing, while Joan Boada forges his Lensky more with his acting than his dancing. Together they make the first act pas de deux look effortless.

I certainly hope that San Francisco Ballet continues to perform Onegin as it is a ballet that satisfies the audience and inspires the dancers to grow as artists. 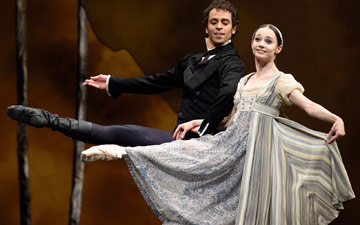