It’s Hip to be Square

It’s not often that one spies a hipster in a porkpie hat at Lincoln Center, but I caught a glimpse of one last night at New York City Ballet (May 29). Unbeknownst to me – I was there to see the new Justin Peck ballet, In Creases – I had stumbled upon the latest instalment in the company’s “Art Series,” a new-ish initiative that brings installations by young contemporary artists into the theatre, and offers specially-priced evenings for the younger set. The company even hosted a party on the promenade at the end, and everyone was invited. These events must cost a pretty penny, but the $29 tickets and the allure of mingling with the art (and other art-lovers) does seem to be working. The audience skewed much younger, and seemed enthusiastic. Will the hipsters come back for more?

Everyone received a party-favor to take home: a hand-painted wooden cube by the Brooklyn-based FAILE art collective. And what about the art? Last season FAILE created a giant column of wooden boxes, painted with ironic – I think – images of Mao Zedong, cartoon ballerinas, and other pop-culture figures. The looming installation looked a bit out of place but it was a fun distraction to walk around at intermission and try to decipher the images. This season, FAILE has changed its format but the look is much the same. On the promenade, the artists have arranged twenty-one rotating wooden columns (short, stubby) that one can touch and spin – they call them “FAILE wheels” – decorated with more colorful pop imagery. A ballerina in a tutu with the words “for exquisite music, guaranteed to perform” written above and below her; a redheaded bombshell in a blue dress, wearing one red stiletto and a mask. The columns look a bit puny in this monumental space, but kids love them – did I mention that they spin?! Then downstairs, FAILE has installed a series of large-scale paintings, in a style I would call “tattoo fantastique,” with the collective’s name obtrusively spelled out here and there. It’s all a bit arch, but the whole installation is redeemed, at least in part, by FAILE’s appealingly tactile approach. The artists – Patrick McNeil and Patrick Miller – work with natural wood, which they carve and paint with their fantastical images. It’s very Brooklyn, very workshop-to-table, and completely inoffensive.

And what about the dancing? It was the New York première of Justin Peck’s In Creases, created last summer at Saratoga Springs and subsequently seen on tour, but not, until now, at the company’s home theatre. It’s a short, lively piece, set to two sections of Philip Glass’s Four Movements for Two Pianos, played onstage. Creases revealed, once again, this young choreographer’s ability to create strikingly imaginative patterns and formations onstage. The skill is even more remarkable, in a way, when accomplished with such a small group (eight dancers). As it begins the dancers bend forward in two interlocking circles, which, in response to the pianos’ first notes, peel outward to become a zig-zagging chain. In many ways their bodies are like pieces in a kaleidoscope, shards that re-compose, disperse, and regroup in new geometric designs.

Peck (who still dances with NYCB) also employs the body itself as a geometric figure, which can be shaped in pleasing and ingenious ways. More than once he uses the women’s legs as spokes in a wheel, or a turnstile (an image that returns in Year of the Rabbit). A woman is spun, with one leg extended in front of her, in the center of a circle, causing the perimeter to bend outward as the leg passes by. Peck’s super-precise, crisp musical response gives focus to the movement as well, as when a line of dancers – arranged from back to front – moves its arms sharply, in a series of semaphores, or perhaps like a machine with highly-coordinated moving parts. At one point the dancers shuffle, at great speed, over and between the bodies of their prone colleagues, like athletes on an obstacle course. Peck has a sharp eye and lots of ideas, and, more importantly, his ballets feel uniquely his. He has his own style of movement: light, crisp, energetic, with lots of energy shooting outward, arms extended, fingers alive, legs shooting, feet like daggers. In a brief curtain speech, Peck said that the work was about “symmetry, athleticism, and magnetism,” and that’s precisely what one sees. What one also sees is a young choreographer taking delight in his own youthfulness and cleverness. It’s not terribly surprising that In Creases is not as fully developed or integrated as Year of the Rabbit and Paz de la Jolla (especially the latter). Peck is young, and it’s only natural that he’s eager to test himself and show off his imagination. It will be interesting to see where he goes from here.

If only Ulysses Dove’s Red Angels, which opened the program, had half as many ideas! It was made for the company in 1994 and is very much a product of its time: a glorification of the dancers’ physiques – glamorously revealed by red unitards – set to rock-infused electric violin (Richard Einhorn’s Maxwell’s Demon). The dancers strike poses – often in profile – strut like models on a catwalk, bend their backs luxuriously, raise their legs in impossible balances. The women squat with their legs flexed in a wide-open stance, one foot on pointe, the better to show off their sinewy musculature and fierce, unyielding demeanors. The whole thing screams: “Sexy!” In a way, it’s like Forsythe’s In the Middle, Somewhat Elevated, more pumped-up and with less sophistication. But the dancers seem to enjoy it. Jennie Somogyi, back from a serious injury – a snapped Achilles tendon – looked marvelously strong. With his extraordinarily flexible, mobile body, Adrian Danchig-Waring used Dove’s undulations and sculptural poses to great effect, embracing the notion of dancer as superhuman. Maria Kowroski, despite glamorous, long lines, looked underpowered.

Richard Tanner’s Sonatas and Interludes came next. The short suite is set to four of John Cage’s works for “prepared” piano: strings modified with pieces of rubber, plastic, bolts and screws. The music is delightfully strange, full sounds that are most un-piano-like. One in particular reminded me of the “ping” of the computer when one hits the wrong key. Tanner’s choreography, rather more conventional, is a series of Balanchinean duets – the inspiration seems to be Duo Concertant – that come across as rather too faithful to the clicks, clacks, and pops of the music. A repeated staccato kick echoes a tinkling sound, or the dancers jump side to side to the beat. The partnering is light and full of air and space, with lots of switching hands and sudden swoops into arabesque penchée. The dancers last night were Sara Mearns and Amar Ramasar, clad in white. Mearns’s dancing, as always, was intensely present and full-bodied, but the surprise here was Amar Ramasar, who, over the past few seasons, has become one of the company’s most electric male dancers. In part, this is simply because he seems to be having such a fantastically good time. He made the most of his solo, cutting through space with his lean, energetic lines, playing with the syncopations and contrasts laid out by Cage. The audience took notice: at the end of the solo, there was a little eruption of applause.

The evening closed with a jukebox ballet set to Ray Charles songs, Peter Martins’ A Fool for You, from 1988. These formulaic suites can be rather hard going, but Martins’ ballet exceeded expectation, though it began to drag by the end. The youthful cast, which included Tiler Peck, a stylish Lauren Lovette, and, as the senior member, a charmingly-understated Joaquin de Luz, tore through Martins’ flirty, upbeat steps. De Luz, who recently co-starred in the musical On Your Toes, has acquired a kind of low-key, aw-shucks charisma that works very well here, especially in a solo in which one girl after another eludes him and he is left alone to show off his considerable bravura chops. The women swished their skirts and swayed their hips, or were swung around vigorously by the men; the men lunged and leapt and strutted their stuff. The ballet has some nifty ideas: the way a woman covers her face, fingers splayed, repeatedly, in “Drown in My Own Tears”; the back-and-forth between two couples in “Rockhouse,” as one couple kicks its legs in enormous rond-de-jambes on the downbeat and the other swishes its hips to the two and the three. Peck was simply phenomenal, completely losing herself in the music, and so full of all-American jazzy allure that she transcended the intrinsically artificial nature of the “pop” ballet. No hipsterish irony here, just plenty of demure sex appeal, swinging hips, and total self-assurance. 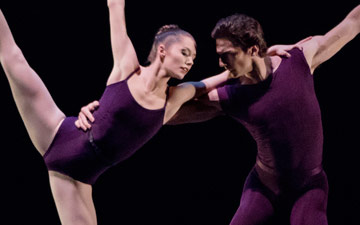