New York City Ballet is understandably proud of having more or less “discovered” three of the most active choreographers working in ballet today: Christopher Wheeldon, Alexei Ratmansky and Justin Peck. The three men hold pride of place in the company’s “Here/Now” festival; each has his own dedicated program, as well as a smattering of other works sprinkled through the season. Wheeldon was the first of Peter Martins’ big discoveries. After joining the company as a dancer 1993, he started making his own works four years later. In 2001 he was made choreographer in residence, and the company began to breathe again after a long dry spell when people had begun to wonder whether ballet was a languishing art. As Brian Seibert noted in the New York Times, out of the 43 ballets in the festival, only eight are from the 80’s and 90’s.

It’s a shame, then, that the company didn’t choose to revive some Wheeldon rarities from its back catalogue, pieces like The Nightingale and the Rose, from 2007, and Morphoses, from 2002, or Evenfall, from 2006. If memory serves, each of these had something singular and unique, worth revisiting. Instead, the company is presenting a Wheeldon program that closes with a recent work that wasn’t particularly exciting to begin with, American Rhapsody, and opens with a familiar work, Mercurial Manoeuvres, set to Shostakovich’s first piano concerto. It is only in the middle of the evening, with the Györgi Ligeti suite Polyphonia (2001), that things begin to get interesting. Liturgy, from Wheeldon’s Arvo Pärt period (which came just after the Ligeti period), also makes an impression, in part because of its casting.

Polyphonia is still probably Wheeldon’s most fascinating work. Its diving-off point is the Balanchine of Episodes, The Four Temperaments and Agon: the lines are clean, the partnering exact and almost scientific, the musicality keen. Ligeti’s piano works, played with marvelous incisiveness by Stephen Gosling and Alan Moverman, set clear moods and lay out uneven rhythmic patterns for the dancers to follow. Four couples maneuver the space, and each other, with the intensity of arctic explorers. The women are lifted, turned upside down, folded; they also climb, dive, and clamber over their partners. They are both strong and vulnerable. Unity Phelan and Zachary Catazaro, new to the work, were the most strikingly erotic couple, despite some slight discomfort in the tricky legato partnering. She split her legs in the air, or climbed between his; he put his hand on her cheek, lifted her by the thigh. The dynamic between them alternated between need, defiance and lassitude. Sterling Hyltin seemed to float as she spun and spun some more, then stopped, on a dime. Sara Mearns was the essence of solitude as her partner, Chase Finlay, quietly departed, leaving her to bourrée meditatively across a dark stage.

Liturgy, set to Pärt’s Fratres for Violin, Strings, and Percussion, helped to bring about a rage for that composer’s music in the ballet world in the early aughts. In this slow, ghostly pas de deux, the dancers seem to barely move. Most of the choreography is for the arms, head, and torso, though there are some extreme lifts here as well, seamlessly executed by the always self-effacing and devoted Jared Angle. Like Wendy Whelan, for whom it was made, Maria Kowroski’s physique is long, lean, linear, almost abstract in its elongated contours. Her melancholy stage presence suits the work, in which whispery strings suggest sorrowful prayer. The dancers’ arms form shapes, lines, circles, angles; these movements continue even after the music stops. With a small range of movements, Liturgy sets a powerful mood.

These small-scale works bring out Wheeldon’s best qualities: intensity, mystery, fluidity of coordination, a seamless cantilena of movement. In comparison, Mercurial Manoeuvres (2000) and American Rhapsody (2016) feel formulaic and unfocused. In Mercurial, a striking opening – a pensive, slightly tortured solo for a man in red, excellently danced by Harrison Ball – gives way to precise, neat choreography for battalions of women in little dresses. The patterns are elegant, but the choreography glides along the surface of Shostakovich’s music, never leading us into its dramatic, antic world. Nor does it tell us anything about the “characters” in the ballet – this melancholy man, or the couple that enters halfway through, engaging in a gorgeous but somehow disconnected pas de deux. Tiler Peck and Tyler Angle glided effortlessly through the duet’s crescendo of complicated lifts.

American Rhapsody was never meant to be much more than an outtake from Wheeldon’s Broadway show An American in Paris, and a vehicle for its star, Robert Fairchild. (Fairchild took a leave from NYCB to perform on Broadway, and then returned to the company last year.) The ballet feels patched together, and is highly dependent on the dancers’ charm. Fairchild is currently in London, performing American in Paris there. Tiler Peck, his original sweetheart in the ballet, has been replaced here by Lauren Lovette, who lacks her swing. Luckily, Amar Ramasar and Unity Phelan are still around to infuse the ballet with some madcap energy. But Russell Janzen is totally unsuited to the role of the jazzy everyman looking for love. This rather serious, lyrical dancer looks lost in the ballet’s quick, low-to-the-ground gyrations. As a result the ballet, already diffuse, deflates even more.

It’s too bad, because there is better Wheeldon stored away in the cupboard. It might have been interesting, for example, to see Polyphonia paired with Morphoses, both with music by Ligeti, both imaginative, striking, and still modern works. But at least we got to see Polyphonia again – a truly great ballet, and one that continues to capture the spirit and style of the company for which it was made. 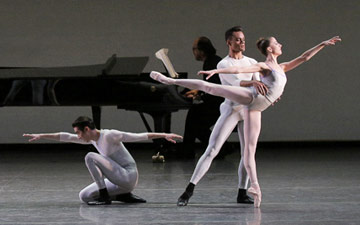