“Why do we love Balanchine?” asked dance critic Arlene Croce in the New Yorker in 1986; continuing with the answer, “Because he makes possible this condition of absolute transparency, this state of oneness with music. And ballerinas are best who can throw themselves away and find that condition, that equilibrium which brings bliss to an audience.”

Watching the Suzanne Farrell Ballet’s weeklong annual season at the Kennedy Center’s Eisenhower Theater last week, I couldn’t help thinking that Farrell and her dancers, year after year, make it possible for Washington audiences to find their own answer to this question: “Why do we like Balanchine?” Is there anything more we can learn about the choreographer and his body of works by now, thirty years after his death?

The Kennedy Center’s own company, The Suzanne Farrell Ballet, is in its 12th season, unfailingly promoting the legacy of the great ballet master. Farrell was Balanchine’s last and most celebrated muse. He created more than 30 ballets specifically on her. Her knowledge and understanding of the Balanchine spirit, tradition and style are complete and unequaled. Her dedication to the memory and heritage of the late choreographer is supreme and resolute.

Each season, the Suzanne Farrell Ballet, with abiding commitment, contributes to our understanding of the Balanchine story, bringing onstage his famous and enduring works and also reviving the lesser-known ballets which otherwise would have faded into oblivion.

The first of the company’s two mixed programs included two of Balanchine’s most significant works: Mozartiana (1981), set to the Tchaikovsky’s Suite No. 4 of the same title, and Episodes (1959), Balanchine’s homage to the orchestral music of Anton von Webern.

Seeing Mozartiana staged by Farrell is an event in itself – an inspiring, unforgettable experience. Her production brings us as close to Balanchine’s original vision as we can get.

Mozartiana was Balanchine’s final masterpiece, choreographed in 1981 as the opening number of the New York City Ballet’s Tchaikovsky Festival.  In a way, this was Balanchine’s farewell gift to Farrell, who inspired and originated Mozartiana’s leading role. In fact, the entire ballet was regarded as “an extended solo for Miss Farrell.” No doubt learning this ballet directly from her meant the world to the dancers.

Mozartiana is relatively small in scale – the cast consisting of only 11 dancers – but its choreography carries a surprisingly deep emotional weight.

The atmosphere of spiritual formality and subtle melancholy is established in the ballet’s opening Preghiera. Bathed in soft, morning light, the leading ballerina is serene and solemn in her prayer. She is attended by four little girls, all dressed in black bell-shaped tulle gowns. Their movements are graceful, eloquent and poised as though to accentuate even more a special ceremonial flair of the dance.

The vivacious and spritely Gigue, danced by a male soloist, perfectly fits the music’s contrasting tone as the aura of poignancy and meditation of the ballet’s first part gives way to a lighthearted, uplifting mood. The stately Menuet is one of my favorite moments of Mozartiana. It’s danced to Tchaikovsky’s masterful orchestral arrangement of Mozart’s Minuet in D, K. 355. The music is lush and expansive, full of poetic lyricism and marvelous ardor. The four ballerinas of the corps de ballet dance in a wonderful fashion, creating a mesmerizing kaleidoscope of choreographic formations. Everything about this scene is perfect – a heavenly merger of music and movement. The ballet ends with Theme et Variations. It’s the longest part of the ballet and includes an extended pas de deux for the ballerina and her cavalier. This witty and enchanting duet is structured as a dialog between the two leads: the main heroine and her partner dance alternating solos as if engaging in a lovely conversation. The finale brings onstage the entire ensemble, and the ballet ends with a tableau that is as visually stunning as it is inspiring.

I saw two different casts, and both performances left an indelible impression on me. On opening night, Heather Ogden, a principal dancer with the National Ballet of Canada, was Mozartiana’s incandescent centerpiece. A strikingly beautiful dancer, Ogden commanded the stage with her elegant style and radiant presence. She was particularly poignant in Preghiera, dancing as if floating onstage in a series of quicksilver bourée steps. Michael Cook was her charming cavalier, providing an effective support in the pas de deux; Ian Grosh was an impressive soloist in Gigue.

Natalia Magnicaballi gave a more subtle, demure rendition of the ballerina role during the Sunday matinee performance. She is one of the most experienced dancers in the company, having worked with Farrell for nearly 15 years. A dancer of keen intelligence, Magnicaballi is firmly at home with the Balanchine technique, having performed the lead roles in many of his well-established classics. Her partner was a tall and slender Pavel Gurevich, who joined the Farrell troupe last year. A talented dancer with a fine classical line, he proved an attentive partner to Magnicaballi.

Last but not least, a special word of praise goes to the impeccably rehearsed quartet of young ballerinas, who captured the audience’s hearts with their immaculate dancing and delightful demeanor.

The edgy and acerbic Episodes offered a stark contrast to the sublime Mozartiana. Here Balanchine refracts through dance movements the anguish and exaltation of Webern’s disconnected and ominous sounds.

Unlike Tchaikovsky, Webern is not particularly easy listening. The Austrian composer was part of the neoclassical movement in music, advocating and expanding Arnold Schoenberg’s atonal method of composition. Yet Balanchine was both intrigued and inspired by the atmospheric and eerie nature of Webern’s orchestral music – his Episodes is as haunting, perplexing and spare as the score to which the ballet is set.

Dressed in black-and-white practice attire, the dancers inhabit a fascinating world of isolated sounds and angular movements. If the first three parts of Episodes can certainly take some getting used to, the fourth and final section of the ballet, Ricercata, set to Webern’s orchestration of Bach’s Ricercar a 6 from The Musical Offering, will make your heart sing with joy as the leading couple and the ensemble of 14 ballerinas create onstage a spectacular visualization of a six-voice fugue.

Farrell dancers demonstrated an admirable effort to conquer the unconventional movement vocabulary of the ballet. The finest dancing came from Jordyn Richter and Ted Seymour (both listed as members of the corps de ballet) in the ballet’s second part – a convoluted and enigmatic pas de deux, remarkable for its striking, unpredictable and often surprising images and shapes.

Paul Mejia’s condensed account of Romeo and Juliet (1977), choreographed to Tchaikovsky’s Fantasy-Overture of the same title, rounded out the first program. 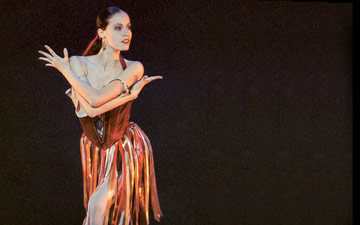