This season The Suzanne Farrell Ballet is bidding farewell to its audiences with final performances at the Kennedy Center Opera House, December 7-9. There will be two programs, each featuring a selection of George Balanchine’s choreographic gems, including Serenade, Chaconne, Gounod Symphony, Meditation and Tzigane. Each of these ballets holds a unique place in the Balanchine canon and carries a special meaning for the company’s artistic director Suzanne Farrell – the legendary American ballerina, Balanchine’s most celebrated muse and a champion of his legacy.

Founded 16 years ago and sponsored by the Kennedy Center, the Suzanne Farrell Ballet has firmly established itself as an important exponent of Balanchine choreography and acquired a loyal and dedicated fan base. The company’s annual performances have become a highly anticipated and cherished event of the Washington area’s ballet season. Over the years, the Farrell Ballet has built an impressive repertory which included not only Balanchine’s masterpieces but also a unique collection of his “lost” or forgotten ballets. Thanks to Farrell’s “Balanchine Preservation Initiative,” the Washington audience has had the rare opportunity to see numerous works of the great ballet master that hadn’t been performed for many decades.

What Farrell was able to achieve with her dancers during their brief seasons (the company operated on a part-time basis, their annual engagements lasting just a few weeks) was truly admirable. With her first-hand experience of working with Balanchine, she staged and revived his ballets with great passion, care and a thorough understanding of his idiom, aesthetics and philosophy, meticulously recreating not only the steps but also the very essence of his choreography. Year after year, Farrell and her company made it possible for audiences to discover and appreciate Balanchine’s genius afresh, opening before our eyes many new and exciting facets of his world.

The impact Farrell had on her dancers, developing their technique and style as well as shaping their artistic identity, is immeasurable. She was their coach, mentor, driving force and inspiration.

“She made me the dancer I am today,” said Natalia Magnicaballi – principal dancer of Ballet Arizona, who has been with the Suzanne Farrell Ballet since its inception – about her time spent under Farrell’s tutelage. “Every day I would feel blessed to be in the studio with her.”

“It was a gift for us all to be able to collaborate and work with Suzanne. It was the closest thing to working with Balanchine,” Heather Ogden – principal dancer of the National Ballet of Canada, who joined the Farrell Ballet in 2005 and danced many principal roles with the company since then – warmly spoke about Farrell. “She helped me to create my individuality as a dancer and to deepen my exploration of ballet as an art form.”

Describing the company’s close-knit atmosphere and the special bond between Farrell and her dancers, Kirk Henning, first soloist, simply put it: “We are a family.”

“I have enormous respect and pride for my dancers, and this final poignant season will be a celebration of them, and a way to express my deep gratitude to the generous supporters of The Suzanne Farrell Ballet,” stated Farrell.

Nearly all of the ballets included in the company’s farewell program chart the pivotal moments of Farrell’s career as a dancer as well as her artistic partnership with Balanchine.

Serenade (1934) is one of Balanchine’s crown jewels, his first ballet created in the United States for the students of the School of American Ballet. It’s one of his most beloved and frequently performed works. A romantic reverie, accompanied by Tchaikovsky’s magnificent score, Serenade features some of the most sublime choreography Balanchine ever created for female corps de ballet. It was in this ballet, in 1961, that Farrell danced her very first solo role – the enigmatic and eerie part known as the Dark Angel.

“It’s so emotional and fulfilling to dance in Serenade,” Magnicaballi said when asked about this work. “Serenade is one of Balanchine’s most iconic ballets. The music, when you hear it, just makes you want to dance,” Ogden added. “It’s such an inspiring ballet.”

Meditation (1963) was the first ballet Balanchine made specifically for Farrell, two years after she joined New York City Ballet. The esteemed choreographer was smitten with his young rising star and Meditation was his love letter to her. “I was eighteen, he was fifty-nine. Critics were shocked that the ‘cool,’ ‘calculating’ master choreographer of Stravinsky’s neoclassical chords could be so blatantly emotional, so romantic, so tragic, so vulnerable,” Farrell wrote about this piece in her 1990 autobiography Holding on the Air.

With the themes of unattainable love, longing and loss permeating the choreography, Meditation is a poetic and deeply poignant pas de deux, accompanied by Tchaikovsky’s elegiac score of the same title. “It shows a man being visited by a kind of spirit, a woman who embraces him, consoles him, and of course leaves him, after having delivered the most amazing off-center pirouettes you have ever seen,” was how dance critic Joan Acocella described this evanescent duet in The New Yorker.

Tzigane (1975) signifies a different chapter of the Balanchine-Farrell artistic relationship. It was the first ballet Balanchine made for his elusive muse after she returned to New York City Ballet, having spent nearly five years with Maurice Béjart in Brussels.

Choreographed to Maurice Ravel’s exuberant music, this 10-minutes ballet contains a technically brilliant solo for a leading ballerina, followed by her duet with a cavalier, all culminating with a dazzling ensemble finale. With this ballet, Balanchine and Farrell ended their painful artistic break-up and embarked on a new beginning. Their renewed collaboration produced a number of illustrious ballets inspired by and created specifically for Farrell.

The regal and mysterious Chaconne (1976) was one of those ballets. Choreographed to music from Christoph Gluck’s 1762 opera Orpheus and Eurydice, Chaconne is a highly-theatrical piece, full of courtly and spirited ensemble numbers and featuring an exquisitely beautiful pas de deux for the principal couple. In her dancing days, Farrell was peerless as the ballet’s central ballerina – a role that is still closely associated with her.

Dance critic Arlene Croce gave a vivid account of Farrell’s dancing in Chaconne in a review for The New Yorker: “Architecturally and ornamentally, her dancing is the music’s mirror, an immaculate reflection of its sweep and buoyancy, with no loss of detail. Farrell’s response to music is not to its moment-by-moment impulse but to its broad beat, its overarching rhythms and completeness of scale. When people speak of her as the perfect Balanchine dancer, this is what they mean.”

Asked if she feels somewhat intimidated to follow in Farrell’s footsteps, Ogden replied: “I feel honored to dance Suzanne’s role. I am such a huge fan and admirer of her career! And I feel lucky to learn it from her. She is a very generous teacher. It feels like she is giving everything she knows to you when she teaches you.”

The newly-restored Gounod Symphony is Farrell’s precious gift to all Balanchine fans. To watch this ballet, which the company revived last year as part of the Balanchine Preservation Initiative, is to admire once again Farrell’s unrivaled gifts as a supreme Balanchine specialist.

The choreography, as rendered by Farrell, is a marvel of architectural geometry in time and space. The fascinating ensembles, with their intricate shapes and configurations, never cease to excite the eye; and the attractive costumes, rendered in black, white and gold, give the ballet a polished appeal, highlighting the choreography’s magnificent, ever-changing patterns. With its current look, this Gounod Symphony proudly takes place among Balanchine’s black-and-white masterpieces.

Describing Gounod Symphony, Kenning said: “It’s a beautiful and grand ballet in size and structure. It’s just fascinating to watch it. But when you dance it – it’s a totally new feeling and I love every moment of it.”

To be immersed in the Balanchine world, to experience and be inspired by his brilliance once again, and to celebrate the achievements of the Suzanne Farrell Ballet – an institution that has left such an indelible mark on the cultural life of this city – do come to the Kennedy Center for their Forever Balanchine finale. These performances are not to be missed, if given by a company that will be deeply missed. 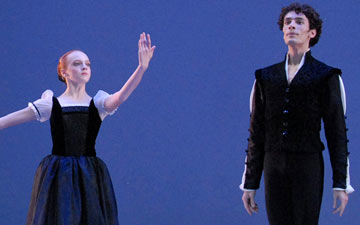