End of an Era

After much tumult over the holidays, New York City Ballet has begun its first post-Peter Martins season. If you’re just catching up, the company’s “ballet master in chief” – ie artistic director – of over thirty years retired on New Years Day, in the midst of an investigation into allegations of physical abuse and sexual harassment. Though he has been accused by former dancers in the press of threatening and even violent behavior, the investigation is ongoing, and Mr. Martins has denied any wrongdoing, ascribing his retirement to a desire to “bring an end to this disruption.” One hopes that the truth with eventually be known.

Where does that leave the company? In a state of shock, presumably. Various dancers have posted forlorn messages on social media, and have been duly chastised by opinion-writers who claim that such postings send the wrong message. We live in complicated, contentious times. Meanwhile, a panel of three former dancers and one current dancer are minding the store: Rebecca Krohn, Jonathan Stafford, Craig Hall, and the resident choreographer, Justin Peck. All are very young, presumably in their thirties or early forties; Peck just turned thirty. Stafford, the eldest, retired from the company in 2014. Their age and proximity to goings-on in the studio guarantee that they are in tune with the pulse of the company, but it is not a set-up that will work in the long term. The choice of a new director will be crucial one.

All eyes are of course on the dancers. How do they look? How is the repertory faring? It goes without saying that we are talking about highly-skilled professionals, devoted to their art. There are no visible fissures on the surface. The first week of this season could have been the first week of just about any recent season; the show must go on. At one performance, I was struck by how many members of the corps de ballet were new to me. These dancers have barely gotten to know Martins as a boss; very soon, he will be replaced in their minds by someone else. The metabolism of a ballet company is lightning fast.

With Martins’ departure one inevitably begins to look at the company with an eye to his legacy. How does the company’s dancing reflect its ballet-master’s dance values? I caught three performances, two made up wholly of Balanchine works, and one of recent creations for the company. Certain qualities stood out: First of all, the vibrancy of the current crop of leading women, each with her own special qualities. The ease and assuredness of Tiler Peck. The authority and Amazonian force of Sara Mearns. The full-throttle attack and aplomb of Ashley Bouder. The luminous beauty and pliancy of Unity Phelan. The icy fire of Teresa Reichlen. The poetry of Ashley Laracey. And behind them, other budding talents: Indiana Woodward (who débuted as Calliope in Apollo this week), Claire Kretzschmar and Rachel Hutsell.

With the retirement of Robert Fairchild last season, the ranks of the leading men are looking a bit thin, though there seem to be some real talents in the corps. In the Saturday matinée of Mozartiana, Troy Schumacher (a soloist) danced a stylish, authoritative, and particularly witty “gigue,” a role in which dancers tend to come across as more cute than clever. But Schumacher made the steps “speak”; he was a real showstopper. Chase Finlay, who danced opposite Sara Mearns in that ballet, was comparatively stolid, appearing taxed by the devilishly hard choreography. Mearns dances the role with too much power, for which she compensates with a barrel-full of intelligence – she is a dancer who imposes herself on roles rather than mold herself to them.

In Cortège Hongrois, Russell Janzen, as Ashley Bouder’s cavalier, wore a distracted expression, as if not completely sure whether he had landed in the right ballet. Which is a shame, because he is a beautiful, clean, and potentially authoritative dancer. As Apollo, Adrian Danchig-Waring too was too consumed by the steps to project the character of the young god coming into his own. This was particularly true in the famous, alternately playful and dreamy pas de deux with the muse Terpsichore. Tiler Peck was all in, but the god was still finding his way. However, it was at this performance that I finally realized that Apollo is really a ballet about the importance, for an artist, of learning how to discern his own taste. It’s only when Apollo rejects what he doesn’t like, and recognizes what satisfies his eye, that he becomes a true god.

Another late-breaking Martins improvement: The orchestra, under the baton of Andrew Litton, sounds better than it has in years, though his interpretations of the scores are not always completely friendly to dance – Apollo, for example, was too slow. But at least he has an interpretation, and the orchestra itself sounds confident and present in the pit, creating a solid platform for what is going on onstage. That has not always been the case.

Another realization: under the tenure of Peter Martins, the company is markedly better in the more abstract works than it is in the more poetic, “classical” repertory. (Let’s call them the “Violette Verdy” ballets.) The Wednesday night cast of Divertimento No. 15, set to Mozart, was on the whole danced well but pallidly. The smiles were too bright, the dancing too pretty, lacking a quiet, inner glow. An exception was Ashley Laracey, whose lyrical dancing created its own soft pool of light. The Four Temperaments, an early modernist manifesto, came next, and was far more vivid. The dancers clearly enjoy dancing it. The Art Deco shapes are sharp and clear, the delivery stylish and cool; nothing looks overly mannered or tentative. The “Sanguinic” pas de deux, danced by Tiler Peck and Tyler Angle, had just the right dollop of risk and jazziness. With her long limbs and nonchalant power, Teresa Reichlen blazed as the leaping firebrand in “Choleric.” (The role is a distant cousin of the Amazon in Rubies.) My guest, who had never seen the ballet, was utterly blown away by it.

Friday evening was devoted to recent creations, and here, once again, an aspect of the current company was revealed: Too many of the new works commissioned from young choreographers are the same – highly technical, cheerful, energetic, youthful. Maybe it’s an after-effect of Justin Peck’s success. His first large work for the company, Year of the Rabbit, capped the evening. It’s still exciting, engaging, ingenious, and keenly musical, but Peck’s relative inexperience shines through. The ballet is discontinuous, lacking depth and inner logic. It seems to careen from clever formation to clever formation, almost surprised at its own ingeniousness. This is hardly a criticism of Peck; he has since moved on to more coherent, thoughtful works (Year is from 2012, practically prehistory.)

But other ballets on the program suffer from the same lack of cohesion or depth. The Wind Still Brings, by Troy Schumacher, alternates between ebullience and moodiness, neither feeling particularly nuanced or interesting. Gianna Reisen’s Composer’s Holiday contains some striking images and uses a sophisticated palette of steps, but becomes cloying. Too much youthful energy diminishes the dancers, makes them look like eager children. You ache for some maturity, some depth of emotion. In this context, it was a relief to see Angelin Preljocaj’s weird 2013 ballet Spectral Evidence, inspired by the Salem witch trials and set to John Cage, with bizarre ghostly costumes by Olivier Theyskens. At least it’s different.

This youthful program was timed for one of the company’s Art Series evenings where tickets go for $30, a great idea. For once, the theatre was boiling over with people in their twenties and thirties, dressed in their hipster finery. After the show, the house hosted a party with free booze on the promenade, which this season is decorated with an installation by the Turkish-American artist Jihan Zencirli. Balloons of various sizes, gathered in clusters, plumes, and cascades, festoon the space, turning it into a colorful bubble bath, an arbor overhung with giant pink and yellow grapes, a DNA strand gone bezerk.

Whatever it looks like to you, it’s a welcome distraction from the conflicts going on behind the scenes and in the world at large. Bring on the balloons. They even make the space smell like a kid’s birthday party. (They’re great for taking selfies, too.) City Ballet will survive this crisis, as it survived the death of Balanchine. And, with time, it will begin to change, too. 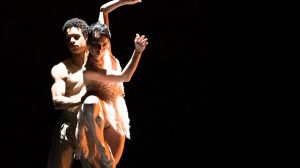