The most moving moment in the New York City Ballet fall gala came at the very start, when the curtain rose in silence to reveal the entire company gathered onstage. “We are the dancers of New York City Ballet,” Teresa Reichlen, one of the company’s principal dancers, read out. She spoke of the dancers’ dedication to their art, of the hard work, and of the importance of mutual respect. “We will not put art before common decency,” she said, in a steady voice. “We strive to carry that quality, purity and passion in all aspects of our lives.”

It was a powerful, sincere statement from a group that has been buffeted by months in which first its director, and then a trio of dancers, were forced to leave the company because of allegations of sexual misconduct. If something good has come of these scandals, it appears to be a greater sense of agency and autonomy among the dancers.

After that came the usual business: a short film about the making of the costumes, starring Marc Happel, the director of City Ballet’s extraordinary costume department. This is the fashion gala, after all. The designers this year were the Italian Alberta Ferretti (maker of beautiful, feminine dresses), and two Britons, Gareth Pugh and Giles Deacon. Each was paired with a choreographer. And again, as usual, the results of these collaborations were mixed.

But the real news about this gala is that it produced one really striking work, Kyle Abraham’s The Runaway, set to a combination of music for piano and violin by Nico Muhly and a medley of songs by Kanye West, Jay-Z, and James Blake. Abraham comes from the world of modern dance; this was his first collaboration with a ballet company, and his first stab at pointe-work. But dance is dance, and both choreographers and dancers are more versatile than people think. He’s also only the seventh African-American choreographer to make a work for the company.

Most of all, The Runaway revealed a fortuitous match-up of choreographer and dancer, dancemaker and muse. It opens with a long, long solo for Taylor Stanley, a dancer with a movement signature all his own – fluid, angular, and soft all at once. Stanley crouches in the semi-darkness, accompanied by a quiet piece on the piano (by Muhly). As he straightens his back, ripples begin to travel across his shoulders; he slowly unfolds one leg and holds it stretched in the air for a long time, then changes focus and shape, standing with his body in an elegant croisé position. The solo is meditative and exploratory, but also beautifully phrased, like an extended thought. It holds you in its spell.

Halfway through The Runway, the music switches from acoustic and post-minimalist to hip hop; Abraham responds with choreography, especially for the men, that is witty and sharp edged: some floorwork, some crazy jumps. His steps for the women, especially the pointe-work, are less imaginative. But the women, too, engage in witty repartee. At one point Georgina Pazcoquin stomps toward the wings and tears off her skirt, then stomps back. The mix of super-stylized hip-hop and ballet isn’t so far-fetched: both forms are urbane, filled with artifice, showy. The exaggerated neck ruffles and weird headpieces are a bit much, but for the most part the Deacon costumes, black and white and semi-baroque, add to the stylish atmosphere. But the beating heart of this ballet is that solo for Stanley.

The other two works on the program were by Matthew Neenan, founder of BalletX in Philadelphia, and Gianna Reisen, a young chorographer and dancer now based at L.A. Dance Project. Neenan’s The Exchange worked least well. The movement – full of creature-like splayed fingers and flicks of the wrist – felt disconnected from both the mood of the music – a movement from Antonin Dvorak’s first string quartet and two waltzes, also by Dvorak – and the costumes. Pugh opted for a red-and-black palette, with some of the women in long dresses and others in short, shapeless ones. Half of the men wore black straps across their torsos, in a kind of semi S&M look. At first, everyone wore a mask. But nothing seemed connected to anything else; the piece had no core.

Reisen’s Judah (named after one of the John Adams string pieces to which it is set) showed more promise, and had the prettiest costumes: deconstructed summer dresses by Ferretti for the women in a wide palette of colors, and sleek unitards for the men. Two white staircases were used as pedestals and launching pads. After a rather frenetic first half, the ballet found its way in a section led by Lauren Lovette, who introduced a hand dance, later taken up by the corps. The repetitive movements suggested a specific action – kneading dough, or weaving, or building a house of cards – and illustrated a figure in the music. Reisen also has a gift for creating pleasing geometric figures. In one climactic section, the dancers formed a kind of human wave, with Lovette surfing its peak. That should have been the ballet’s final image, but it turned out there was one more section to go.

No evening of new works is perfect; the excitement lies in the hope that at some point some magic will happen. And in that solo for Taylor Stanley by Kyle Abraham, we got a glimpse of that magic. 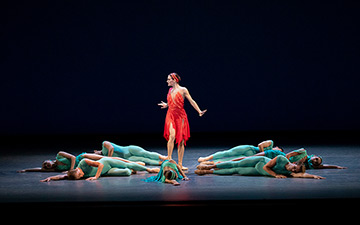 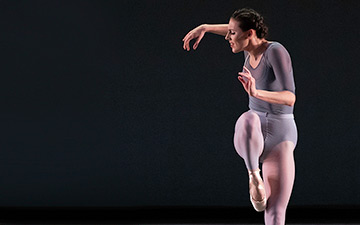 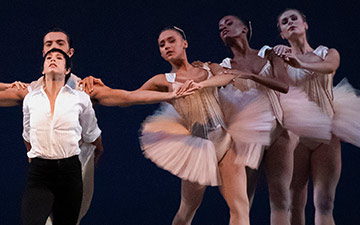