How heavenly to be confronted with azure skies as the background for the Royal Ballet’s American triple bill! What bliss to be able to see the dancers’ faces! We’re released into the open air, enjoying the sunlight and passing clouds, rejoicing instead of being plunged in gloom.

Apollo, the central character of George Balanchine’s 1928 ballet, is the Greek god of the sun (among many other attributes). The Royal Ballet dances the full version, with a prologue and apotheosis, instead of the abbreviated account preferred by Balanchine’s company, New York City Ballet, since 1979. In the prologue, we see Apollo’s mother, Leto, giving birth to her son by Zeus, atop a stylised arch and stairway. Down below, Apollo is unwound from his swaddling cloth by two handmaidens, as Stravinsky’s score announces that something momentous is about to unfold.

Is Apollo a coltish youth, an unformed demi-god, needing instruction before he can join the muses on Mount Parnassus? Or is he already aware of his destiny as an artist, primed to communicate with gods and humans through music, poetry and dance? Over the years, dancers and their coaches have interpreted the role differently, querying what Balanchine really intended. Vadim Muntagirov and Patricia Neary, for the Balanchine Trust, present his Apollo as the inheritor of a divine bloodline (do gods have blood?), who has only to mature before meeting his father’s approval. He’s already a fine classical dancer in the making.

When Muntagirov’s Apollo first strikes his lyre, his flailing arm echoes that of his mother (Gina Storm-Jensen as Leto) in the throes of labour. He has yet to find out what his long arms and legs are capable of doing, and what the three visiting muses have to offer him. He is very gentle with them – Muntagirov has no rough edges – but decisive in rejecting two of their gifts, at least for the time being. Calliope (Anna Rose O’Sullivan), muse of poetry, proffers a tablet for writing; Polyhymnia (Mayara Magri), muse of eloquence, holds out a mask. His interest is caught by Terpsichore (Yasmine Naghdi), muse of Dance, with her decorative arms and striking leg extensions. In spite of the jazzy inflections in her introductory solo, she has an innocence about her, which chimes with his. She sits childishly on his raised knees and then swims or flies, balanced high on his neck and shoulders. She is not so much his instructor as his co-discoverer.

Muntagirov has the advantage of being much taller than his companion muses, so he soon learns how to harness their playfulness. Although he covers space boldly in his second solo, discovering his growing power, he has moments of vulnerability. Exhausted, he rests his head in their hands. Alert, he hears the call from his father, loud and clear in the music, and moves to climb the stairs up to Parnassus. The muses fan their arabesques behind him like the rays of the sun before following him up the steps. His mother is present, down below, to witness her son come into his inheritance. Sublimely done, the apotheosis sends shivers down your spine.

What to say about Natalia Osipova’s account of Balanchine’s Tchaikovsky pas de deux, with Reece Clarke as her partner? It, too, is a role that can be interpreted in different ways, and Osipova’s is her own (as is her Dying Swan). She flings herself at the choreography with plenty of panache but no nuances. She’s as headstrong as the wilful wife in Kyle Abraham’s new Optional Family trio in the Royal Ballet’s previous programme. Clarke is sweetly considerate, catching up with her as best he can. He executes his virtuoso passages well but doesn’t assert himself (yet) as entitled to take centre stage. The pas de deux is all about her.

The Royal Ballet’s familiarity with Jerome Robbins’s Dances at a Gathering has grown in confidence since its unscheduled revival in February last year, shortly before the first lockdown. (It was screened during the RB’s digital season in September.) William Bracewell has blossomed as the man in green, catching the eye with beautifully fluent arms as he waltzes, usually with Francesca Hayward in mauve as his partner. They aren’t a colour-coded pair, and she seems somewhat reserved until she seizes her opportunity to shine in a solo quite late in the ballet. Marianela Nunez and Federico Bonelli do appear to be a couple, she in pink and he in purple, because they are so at ease with each other – and they have the longest, loveliest pas de deux.

It’s almost an affront when she then dances another pas de deux with Alexander Campbell, the man in brown who opens the ballet on his own, as if recalling his memories of a gathering of friends. Perhaps the ballet’s air of nostalgia is about youthful options that may or may not have been taken up: it’s not a series of duets for lovers. The dancers combine in various groupings: a wistful trio of long-haired girls, a combative duet between two sparring men, show-off games for three boys with carefree female admirers. The woman in green, Laura Morera, arrives well into the ballet, staking her claim to be the centre of attention. More mature than the others, she isn’t fazed when she’s casually rejected by men who won’t stop to dance with her. Like Bonelli, Morera has a keen awareness of the absurdity of taking oneself in this ballet too seriously.

The absence of any real development of relationships is one reason why the hour-long suite of dances can pall. Chopin’s waltzes and mazurkas pour out of Robert Clark’s fingers on the piano in the pit, their once-random order determined by Robbins shortly before the New York City Ballet premiere in 1969. The sequence is about the music and the dancers involved rather than any narrative thread: Robbins insisted the continuity was simply a celebration of dancing. But after a series of more and more encounters, a longing grows for the penultimate scherzo to get going and for the nocturne to bring a contemplative conclusion. Clouds darken the sky as all ten dancers stand and watch a momentary shadow before dispersing. The evening is replete, but we’re a little regretful that it’s over already. 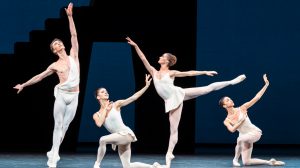